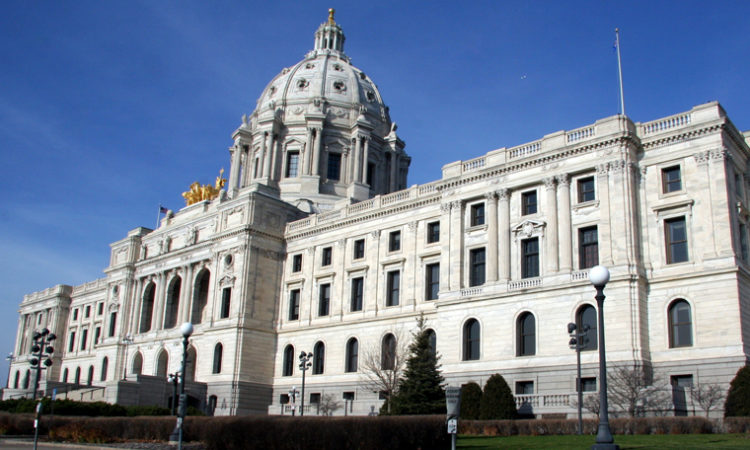 With a Long List of To-Dos and Not Much Time, What Can the MN Legislature Get Done This Session?

Facing a May 21 deadline, Republicans in control of the House and Senate are scrambling to get several key proposals to the governor’s desk.
By Briana Bierschbach
May 10, 2018

Gov. Mark Dayton has been talking a lot about a snowstorm in July.

It’s only under that improbable scenario — even in a state where it recently snowed more than a foot in April — that the DFL governor said he will be inclined to call an overtime special session of the Minnesota Legislature this year. He’s been repeating that promise in one way or another around the Capitol for the last several weeks, and legislators are listening.

With less than two weeks left before the deadline to adjourn the regular 2018 session, Republicans in control of the Legislature are scrambling to get a number of key proposals to the governor’s desk. If Dayton stays true to his promise, that will be lawmakers' last chance this year to pass a major tax conformity plan, a bonding bill with hundreds of millions for construction projects around the state, and plenty of other significant proposals on things like school safety and sexual harassment.

There’s still plenty of work to be done before the gavel comes down on May 21, as evidenced by the flurry of activity at the state Capitol this week, and lots of differences to work out. Over the last few days, legislators have spent hours debating and casting votes on bills and lining up House-Senate conference committees to try to work through their differences on major proposals. Dayton, meanwhile, held press conferences to push for his priorities and sent more than 100 letters from his commissioners detailing concerns they have with various policies currently moving through the process.

“I have a stack of items,” Dayton said Tuesday when asked about provisions he will bring into negotiations with Republican legislators. “A couple volumes worth.”

Some around the Capitol are more optimistic than others about getting all that done before the deadline to adjourn. “I don’t see the differences right now being all that far apart,” Republican House Speaker Kurt Daudt said this week. “Obviously, there are some things that we do disagree on, but I think we can find common ground and get some bills that he could sign.”

DFL House Minority Leader Melissa Hortman had a different read on the situation: “It feels like we’re in a car driving really fast toward a brick wall.”

Last year, as lawmakers debated how to craft the state’s $46 billion, two-year budget, it took until nearly the midnight deadline of the regular session to get a handshake deal. That was followed by a chaotic, multiday special session to get all the work done. At several points during the overtime work, the tenuous budget deal nearly unraveled.

This year is a shorter session, and the state budget is already in place, but lawmakers still face a number of complicated and unexpected problems. The biggest on their plate: conforming state and federal tax code after Congress passed the massive tax overhaul late last year. That’s created a mess for the state’s tax code, and depending on what lawmakers manage to get done this year, Minnesotans could be facing tax increases, as well as more complicated tax forms next year. That’s in part because the federal overhaul raised the standard deduction while eliminating personal and dependent exemptions that many Minnesotans claim.

Dayton and the House and Senate all have different plans to tackle the problem. They also have major differences in style and philosophy regarding who should pay more in taxes. Dayton’s plan, for instance, would increase taxes on some businesses and wealthier residents to pay for targeted credits for middle-class taxpayers. Republicans in the House and Senate prefer to use some money from a $329 million budget surplus to provide more broad income tax cuts for low- and middle-income Minnesotans.

“This was supposed to be the year off for the tax committee. How is that working out for me?” Republican House Taxes Chairman Greg Davids said.  “You can’t force people to get along, but everybody realizes how important it is to get this done.”

And that’s just taxes. Both parties would also like to:

To complicate end-of-session negotiations even more, other last-minute issues have cropped up. Last week, Dayton said he wants to increase the per-pupil state school allocation to help districts that are struggling to balance budgets for the next school year. There are 59 districts facing budget cuts due to a range of factors, including teacher contract settlements, inadequate federal support and declining enrollment, he said. Dayton’s asking for $138 million increase in the distribution to split among all the state’s districts.

Republican Senate Majority Leader Paul Gazelka said there’s simply not enough time — or wiggle room in the $329 million budget surplus — to add that to the agenda. “We don’t have the time or resources to do that,” he said. “It came just a few days ago, and we reminded him of all of the priorities we all talked about, all taking money.”

In the final days of session, how an issue is framed can be as important as the substance of the bill trying to address it. In his pitch for the schools money, Dayton said reluctant Republicans are favoring the rich over school kids and teachers. How does he get there? The GOP tax plans reduce the reach of the inheritance tax — the “death tax” to its opponents — which cuts the tax liability on estates and sops up money that could fund his school relief. Dayton plans to hit the road this week and visit school districts to drive his point home.

Republicans are practiced at this strategy, too. They have a proposal to take money from a Vikings Stadium reserve fund — which is filled with taxes on charitable gambling, corporations and more — to help pay for new veterans homes. While the federal government will pay 65 percent of the costs, states must come up with a match.

Dayton suggests putting the veterans homes into the state bonding bill, which is paid for mostly by borrowing, but Rep. Sarah Anderson, R-Plymouth, wants to reduce the projected surplus at the stadium to cover the costs, and last week, she said Dayton was choosing possible stadium needs over those of veterans. Those issues will only complicate the end-of-session back-and-forth between the governor and legislative Republicans.

A more open process this year?

In the past, this is the part of the legislative process that tends to go dark. Top leaders and the governor retreat to private negotiations and committee hearings, and floor votes are moved to the middle of the night. Often, most rank-and-file lawmakers don’t know what they’re voting on until it lands on the floor.

At least for now, all sides are saying they want to do things differently this year (which is what lawmakers say every year). Republicans will head into joint House and Senate committees over the next week to work out their differences on a host of bills, from taxes and school funding to bonding.

“The way this process should work is we do this in front of everyone in open conference committees and the governor should send his commissioners and staff ready to negotiate in those committees,” Daudt said. “The governor can gain some leverage by not participating in that process and kind of forcing us behind closed-doors negotiations; I hope that he doesn’t do that.”

For his part, Dayton isn’t particularly interested in negotiating with the House and the Senate at the same time. He’d like them to come together and form a single position on all the major issues. “I’m not going to negotiate three ways,” Dayton said.

Everyone does seem to agree on one thing: A special session is a bad idea. It’s a major election year this fall, with the entire House on the ballot and some state legislators in the midst of campaigns for congressional seats or the U.S. Senate. Dayton isn’t running again, but plenty of others are vying to take his place in the governor’s office.

“When the gavel goes down sine die, people aren’t going to want to be sitting around thinking about a tax bill, or anything else, for that matter,” Davids said.