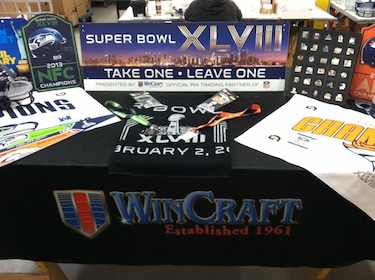 A Winona-based company is the official manufacturer of 40 product lines for this year’s NFL Super Bowl XLVIII.

WinCraft, Inc.—a licensed retail and promotional product manufacturer for professional sports leagues as well as 500 colleges—is producing towels, flags, pennants, decals, and clocks, among other products, bearing the logos of the Seattle Seahawks and the Denver Broncos.

Dick Pope, CEO and chairman of WinCraft, declined to disclose the exact number of products his company is making for this year’s Super Bowl, but he told Twin Cities Business that it’s “in the thousands.”

Pope said that his company presold the NFL Super Bowl market and began shipping some products on Monday, one day after the conference championships. He added that all of his company’s products are manufactured at 10 facilities in Minnesota and Wisconsin.

Pope said that WinCraft is the NFL’s “oldest continuous licensee,” and that the NFL has represented his company’s largest market for the past 35 years.

Founded in 1961, the privately held company also licenses products for other professional sports leagues, including the MLB, the NHL, the MLS, and the WNBA. Pope said that WinCraft also manufactures products for the Olympics and the FIFA World Cup.

Wincraft isn't the only Minnesota company that might benefit from the big game.

Wrenshall-based Locally Laid Egg Company was recently among the final four companies in a contest to win a Super Bowl commercial.

The NFL Super Bowl XLVIII will take place on February 2.