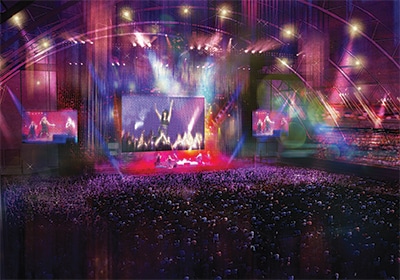 The Minneapolis Armory, where the Minneapolis Lakers played games in the 1950s, has been a real estate riddle for nearly 30 years in downtown Minneapolis. The Minnesota National Guard moved out in 1986; Hennepin County paid $4.7 million for the fortress-like structure in 1990, intending to raze it for a new jail. But that bid was blocked in 1993 by the Minnesota Supreme Court, and now the building is the city’s most historic car park.

The Depression-era relic takes up a full city block between 5th and 6th Streets. The building, which dates to 1935, is the only downtown parking garage that’s also listed on the National Register of Historic Places.

Owner Doug Hoskin continues working on a long-simmering plan to redevelop the property: It calls for a $35 million conversion to a music and multipurpose venue that could hold 6,000 people. Hoskin declines to name his potential music business partner, but he hopes to start construction next spring and expects to draw much of the financing from historic tax credits.

The rebounding fortunes of the east side of downtown may help Hoskin’s case. The armory is two blocks from the site of the $1 billion stadium under construction for the Minnesota Vikings and across the street from the new urban park planned for former Star Tribune land, part of the $400 million Downtown East redevelopment.

“Having the connection of the stadium, the park and the armory has the wonderful opportunity to work for the benefit of all of us,” says Hoskin, who adds that he has already spent more than $200,000 on architects, engineers and consultants for the concept.

Development interest is spreading in Downtown East. Thrivent Financial recently tapped Bloomington-based real estate firm Cushman & Wakefield/NorthMarq to analyze potential site uses for parking lots to the east of its corporate headquarters in downtown Minneapolis, including a full-block surface parking lot across the street from the armory.

There are no definite plans yet, but according to a statement from Thrivent spokesman Brett Weinberg, “Thrivent recognizes that this land is a key parcel in a rapidly developing area and has already been approached regarding our future use of these lots.”