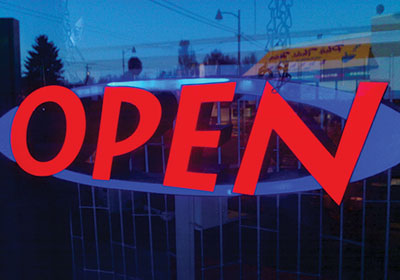 If any one symbol has become synonymous with storefronts, it’s the red/blue “swoop” “OPEN” sign. Take a walk down any urban street and chances are there’s a bright “OPEN” LED sign—sometimes blinking, sometimes swooping—to usher you in. From chic restaurants to meticulously branded coffeehouses to mattress outlets, every window seems to sport a nearly identical device. Why?

The red/blue signs only became ubiquitous 10 years ago, says Doug Martin, CEO of CM Global, a Watertown, Wisc.-based retail sign merchant. “It doesn’t matter if you are an upscale business or a run-of-the-mill whatever; everybody wants an ‘open’ sign,” Martin says. From the confines of a moving auto, bus or bike, it’s often the only definitive way to tell if a business is operating.

Previously, neon tubes were used, but they had a tendency to flicker, buzz and suck electricity, so retailers stuck a card on the door or did without them altogether. But LED’s affordability, sturdiness and longevity brought new life to the storefront eye-catcher. “The market has become pretty saturated,” Martin says, so “businesses are looking for alternatives.”

CM Global is now customizing their sign for chain stores looking to better brand their openness. For instance, Subway switched from neon to LED, and Little Caesars added their toga-wearing mascot. Martin estimates his business sells 50,000-plus “open” signs annually. Martin says the average small businessperson finds theirs at Costco or Walmart online.

What’s interesting is that many chain businesses seem to leave the sign decision to local employees. Caribou Coffee spent a tidy sum with Minneapolis-based Shea for a sophisticated revamp of its branding, but a handful of its Twin Cities stores have the blinking “OPEN” in the window nonetheless. Jersey Mike’s Subs in Uptown has a CM Global sign, but not in Dinkytown. “It’s been here as long as I can remember,” says David Williams, manager of the Uptown shop. “I think it showed up in a box one day, so we just hung it up.” —Sam Schaust