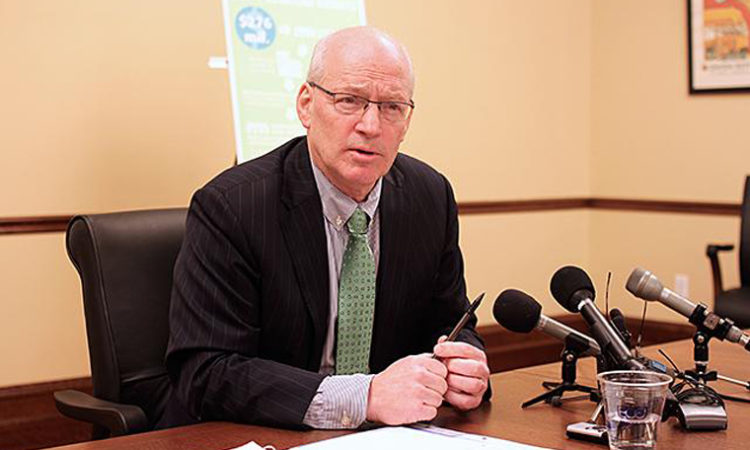 Why is Minnesota’s Budget Guru So Worried?

There are several reasons why Minnesota Management and Budget Commissioner Myron Frans is concerned about the state budget. The biggest one: What, exactly, will the federal government do?
By Briana Bierschbach
July 18, 2017

As the state of Minnesota’s top budget official, he’s constantly monitoring the state and federal economy. For the last several years, things have been going well in Minnesota, with a low unemployment rate, a diverse economy and a relatively flush state budget. After a decade of deficits, legislators had surpluses to spend during the last two budget years.

But there’s not as much room for error these days. And as an obsessive budget watcher, that makes Frans uncomfortable. “We have a balanced budget,” said Frans, who’s been the Minnesota Management and Budget commissioner since 2015. “But boy, it’s really, really skinny right now.”

Several things are happening that concern Frans. One is that two monthly revenue reports in a row show income tax collections coming in lower than expected. The state is currently collecting about $104 million less in revenue than it anticipated for 2017, mostly due to overly enthusiastic predictions, Frans said.

The second source of concern is the $300 million transportation funding bill and the $650 million package of tax cuts included in the most recent state budget deal. Those bills gobbled up much of a $1.65 billion budget surplus, and they will only get more expensive down the road. By Frans’ estimates, the tax bill will cost $790 million in the next budget, and the transportation bill will cost $448 million. That, plus more spending for K-12 and early education, transformed a projected $2 billion surplus for the 2020-2021 budget cycle down to a $386 million surplus, according to figures from his office.

But the biggest unknown is the thing Frans and other state officials have the least ability to control: what the federal government will do.

Everyone’s waiting to see if Republicans in control of Congress will repeal the Affordable Care Act, which state officials estimate could blow a $2 billion hole in Minnesota’s budget by 2021. And that doesn’t include some of the other, non-healthcare related budget cuts proposed by President Donald Trump. Frans has a pages-long list of the most potentially problematic ones, and his office is still trying to tally up just how much funding it could mean for the state.

It’s an uncomfortable situation, Frans said, because he remembers what it was like when the state’s economic picture wasn’t so pretty. He was appointed by Gov. Mark Dayton as Department of Revenue Commissioner in 2011, when lawmakers were facing a $6 billion budget deficit.

His boss, Dayton, is heading into his final year in the governor’s office and is determined to leave the state’s budget picture much prettier than when he walked in. He’s so determined, in fact, that he vetoed the entire budget for the Legislature after the 2017 session ended in May. The point of the veto was to try and bring legislative leaders back to renegotiate the tax bill, which Dayton worried was too costly in the years to come (Dayton signed the tax bill, he said, because of a provision in another bill that would have defunded the Department of Revenue without passage of the tax package).

Legislators weren’t persuaded. They sued Dayton over the veto, a legal battle that’s still working its way through the courts.

So then what? Frans said there’s a lot of watching and waiting. Will Republicans in Washington D.C. manage to repeal the federal health care bill? How will the judge rule in case against Dayton’s veto? What will happen with the national economy and how will that trickle down to Minnesota?

There is one thing that gives Frans some comfort: Minnesota’s $2 billion in budget reserves. It’s been slowly building over the years and is now one of the largest reserves on hand of any state in the nation. But it’s specifically set up to help the state in the event of another major economic downturn, Frans noted, not necessarily to backfill billions of dollars in lost federal funding.

There’s still $163 million unspent from the last session, but that’s mostly due to the fact that Dayton nixed the budget for the Legislature. If that’s completely restored, only $50 million is left, but most are expecting about $43 million of that total will be used next year on a pension reform package. That leaves just $7 million of a $46 billion budget.