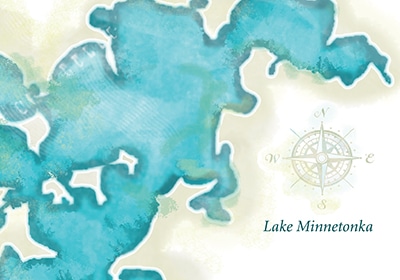 Where To Entertain Clients On Lake Minnetonka

The social season is officially open on Lake Minnetonka. Here’s a lineup of both new and classic settings to entertain clients or do business.
By Melinda Nelson
June 02, 2014

Clients from Chicago’s North Shore, who spend hours commuting into the city every day, will be enchanted by Wayzata. Located 20 minutes from downtown Minneapolis, downtown Wayzata is where it’s at in summer. To further tempt your clients to relocate, take them to Cru, restaurateur Dean Vlahos’ newest concept, opening in July. After creating BLVD, a hot spot for the west suburban jet set, Vlahos and partners have reimagined the former Sunsets’ space into the new jewel of Wayzata’s near-waterfront, and a magnet for the beautiful, bodacious and powerful. 700 E. Lake St., 952-473-5253, cruwayzata.com

Take your clients from Los Angeles for a spin down Ferndale Road, the Bel Air of Wayzata. Admire the mansions of local oligarchs hidden behind stately hedges, and view the brash new construction replacing majestic lakefront properties. After the tour, request a table on the rooftop patio of 6 Smith, chef JP Samuelson’s new restaurant in the Minnetonka Boatworks, opening in late June. Order a round of mint-infused bootlegs—the mojito of Lake Minnetonka—and savor some serious people-watching over an artisanal surf-and-turf feast of heritage steaks, burgers and fresh seafood. Boatworks, 294 Grove Ln. E., 952-698-7900, facebook.com/pages/6Smith

Visiting New Yorkers will be delighted by Excelsior, the charming lakeside town settled in 1853 by pioneers from NYC and named for the state motto “Ever Upwards.” With a main street dotted with shops, restaurants, and a bay filled with vessels of all sizes, Excelsior feels much like Sag Harbor in the Hamptons. To soak up the East Coast vibe, score a table outside at Coalition, which opens in June in the former Biella space. The chef-driven restaurant promises to become the city’s most ambitious dining experience. 227 Water St., no phone at press time, coalitionrestaurant.com

Clients with a taste for rock and roll will appreciate Victor’s on Water, scheduled to open in Excelsior in June. Led by executive chef Phillip Becht, the upscale Italian restaurant pays homage to Victor Bacon, original owner of the Bacon Drug building. The former soda fountain is hallowed local ground. According to Lake Minnetonka lore, it’s where Excelsior man-about-town Jimmy Hutmaker reportedly comforted Mick Jagger over a cherry Coke after the Rolling Stones received a less than enthusiastic welcome at Big Reggie’s Danceland, circa 1964, telling him, “You can’t always get what you want.” 205 Water St., 612-382-5814

Clients who know Del Mar, the tony, half-timbered Tudor village overlooking the ocean in San Diego’s North County, will grin in recognition when they step across the threshold of Lord Fletcher’s, the lake’s last outpost of the British empire. Bypass the endless summer mayhem on the patio in favor of the quieter Quarter Deck upstairs. Feast on Alaskan king crab, steak and Fletcher’s signature Canadian walleye, as you observe the very California-style scene of dudes, babes and big boat owners mixing and mingling on the wharf below. 3746 Sunset Dr., Spring Park, 952-471-8513, lordfletchers.com

Clients from Boston will be fascinated by Long Lake, our own version of Walden-meets-On Golden Pond. As you drive on Old Highway 12, slow down to admire the hypnotic elegance of rowers from the Long Lake Rowing Club sculling noiselessly across the water as the sun sinks below the horizon. Join the crowd of landed Orono gentry and low-key, old-money Long Lake locals at Birch’s, where chef/owner Burt Joseph’s sophisticated, supper club-style specialties include the cast-iron pan-fried Buckhorn chicken, named after Long Lake’s legendary roadhouse. 1935 W. Wayzata Blvd., 952-473-7373, birchsrestaurantandbar.com