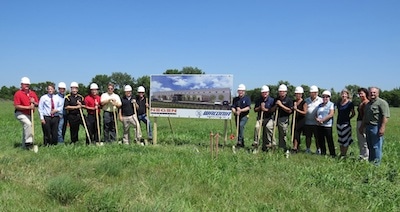 Waconia Manufacturing, Inc., broke ground July 18 at a 9.36-acre site in Norwood Young America where it is building a new 67,000-square-foot facility.

The Waconia-based company, which manufactures fertilizer blending systems and other agriculture equipment, said the expansion will speed up manufacturing and cut down on the time it takes to deliver finished products.

“This new facility is going to allow us to serve our customers better,” Waconia Manufacturing President Troy Williams said in a statement. “The engineering and manufacturing technology will be state-of-the-art, which will make it easier to maintain our strict quality standards.”

The new facility in Norwood Young America, a small town located southwest of Waconia, will double the manufacturer’s size—its existing facility in Waconia is also 67,000-square-feet.

Completion of the new facility is scheduled for early 2014 and will include manufacturing and office space as well as storage for finished products.

A Waconia Manufacturing spokesman told Twin Cities Business that the company, which has been employee-owned since 2008, plans to hire 15 people for its Norwood Young America location, mostly to fill manufacturing positions. While some of the manufacturer’s approximately 70 employees will move to the new facility, the majority will remain at the Waconia location.

The spokesman declined to disclose the company’s revenue, but said Waconia Manufacturing has experienced a “significant backlog of orders” and an increase in sales due to “the strong agricultural economy,” making the addition of the new facility a necessity.