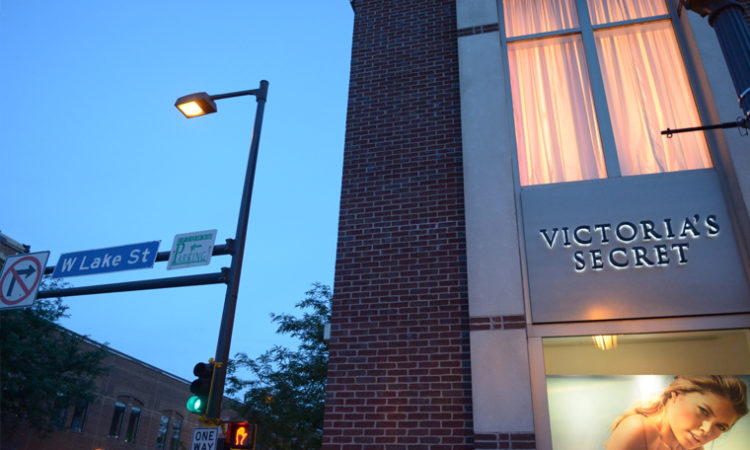 The owners are seeking a new "unique" tenant for the high-profile retail space.
By Burl Gilyard
January 29, 2018

The Victoria’s Secret store at the high-profile corner of Lake Street and Hennepin Avenue in the heart of the Uptown area of south Minneapolis has closed after a 10-year run. The two-story retail property, across the street from the Calhoun Square urban shopping mall, is now up for lease.

“There has been enormous interest,” says Ruth Weisberg, a member of the family that owns the property under the Morton Realty LLC entity. No deals have been signed yet. “There’s all kinds of things we’re thinking of…that is the marquee corner.”

Weisberg said that the family made the decision that they did not want to renew the lease with Victoria’s Secret because they wanted something new in the space. The store is now closed, but Weisberg noted that the Victoria’s Secret lease does not technically expire until Wednesday, January 31. Jeff Herman of Minneapolis-based Urban Anthology, a retail-focused commercial real estate firm, is marketing the property for the owners.

Victoria’s Secret is one of several brands owned by Columbus, Ohio-based L Brands Inc. According to the company’s most recent annual filing, it operated more than 1,100 Victoria’s Secret locations in the U.S. as of late January 2017. In an email to Twin Cities Business, L Brands confirmed that the store has closed and that its last day of business had been January 21.

Before Victoria’s Secret, the building was occupied by The Gap for 15 years.

In other neighborhood news, the Uptown location of Arby’s also just closed. Sunday was its last day of operation.

Store closings can be seen as a discouraging economic signal. But Weisberg points to numerous current projects as signs of the Uptown’s strength: the just-opened Moxy Minneapolis Uptown hotel, the current construction of the new MoZaic East office building and redevelopment plans for the Sons of Norway site which call for more than 300 apartments.

The Uptown area has been a big draw for developers amid the apartment building boom. Minneapolis-based retailer Target Corp. opened a smaller-format Uptown store in October.

Given the activity in the area, Weisberg says that there should be strong demand for the empty retail space.