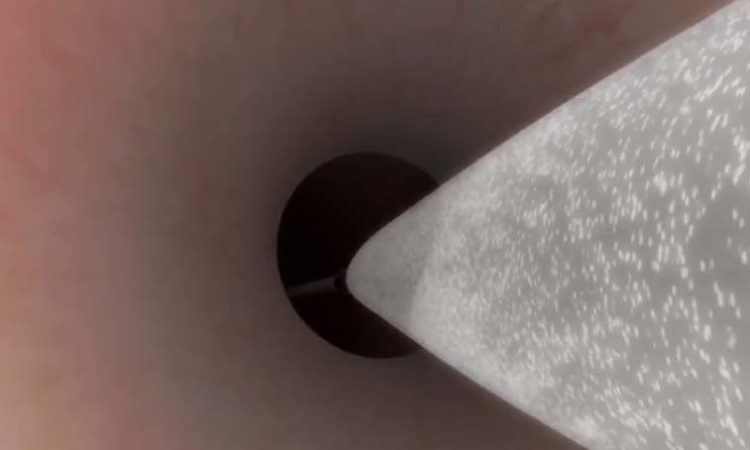 The Optilume close up (screen shot from video by Urotronic).

Capital from Urotronic's biggest funding round yet will help advance its work on a drug-coated medical balloon meant to provide a safer treatment for urethra blockages.
By Amanda Ostuni
August 22, 2018

Plymouth-based Urotronic secured $20 million in a recent Series B fundraising round. The capital came from seven investors, with the first sale made August 15, according to a filing published Tuesday by the U.S. Securities and Exchange Commission.

Founded in December of 2014, Urotronic is developing treatments options for men experiencing blockages in their urethra. Urotronic’s main device, The Optilume, is a medical balloon coated in a drug called Paclitaxel.

Normally urethral blockages, called strictures, are treated by either removing them with rods, cutting them, or inserting and inflating a balloon. These methods all intrinsically damage the lining of the urethra, which can ultimately narrow the passageway and create scar tissue, resulting in a higher risk of future blockages.

The Paclitaxel drug is believed to reduce the formation of scar tissue, making for a safer and more efficient treatment.

“Our device, just like the others, creates micro tears of fissures in the tissue, but those are unique in that they provide uptake for the drug to reside in the tissue, and then prevent the smooth muscle cells from dividing and proliferating and laying down scar tissue,” Urotronic CEO Dave Perry told TCB last November.

According to Urotronic, there are 1.5 million office visits a year in the U.S. for the treatment of urethra blockages, and The Optilume is expected to cost around $1,500.

Work on the device – and a second product targeting benign prostatic hyperplasia (BPH, or an enlarged prostate) – is ongoing. Perry says they have completed clinical trials in Latin America for both products, though the BPH trial is not as far into the follow-up stage as The Optilume stricture device. The next step for both is a U.S. trial, with a trial also planned for Canada and commercial approval pending in Europe.

Perry hopes that at least for the stricture device, U.S. trials will begin next year with FDA approval. That’s set to be conducted at the University of Minnesota and four other medical centers across the country over the course of five years.

The $20 million just raised will reimburse previous study costs, help fund upcoming studies, and allow for both space and personnel expansion. Perry says they are moving into the building next door to Urotronic’s current facility, to add three manufacturing lines, as they need four for full commercialization.

Perry adds they want to double their staff from the current 13 people to about 28 by the end of next year.

“We have a great team,” says Perry, “and we need to continue to build that team in order to deal with all the challenges in front of us.”

The recent funding round is a sign of continued growth, after Urotronic weathered a trade secret-related court case involving Christopher Barry, who had been named CEO of Urotronic in May 2015. Barry had been hired after leaving his position as vice president of research and development at Lutonix, a New Hope-based company also working on drug coated balloons (DCBs).

Barry plead guilty in May 2017 to trade secret theft, admitting to taking dozens of files from Lutonix relating to its proprietary DCB products and sharing them with Urotronic employees. Urotronic did not face any legal ramifications itself, though, and asserted the company was unaware of Barry’s actions but forced him to resign immediately upon discovery.

Urotronic forged on and just last year closed another fundraising round – its second ever. That round generated $6.1 million in capital, bringing the company’s total at the time to more than $10 million raised over two rounds, according to Crunchbase. The $6.1 million went toward research and development, clinical costs and some workforce additions.