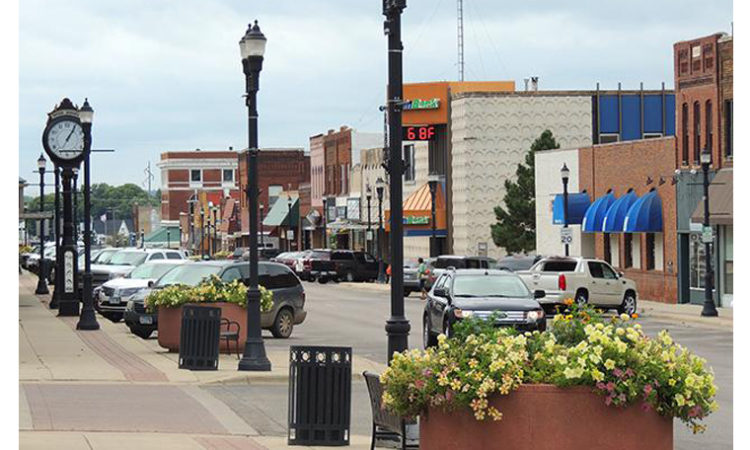 Greater Minnesota has had an uneven recovery from the Great Recession, which curbed retail. ( Photo by Gregg Aamot/MinnPost)

As the rural economy has evolved, so too has the University of Minnesota Extension, the public agency charged with “extending” the university’s expertise and knowledge into every corner of the state.
By Gregg Aamot
July 19, 2018

For the past year, I have been reporting on the rural economy – a broad category that has allowed me to write about a labor shortage in parts of Minnesota, the transformation of an old mining town into a biking destination, and the plight of small-town newspapers, among other stories.

In visiting about a dozen small towns for this project, I have found the economy outside the Twin Cities metropolitan region to be more layered and complex than advertised, with longstanding industries – farming and manufacturing, to name two – now sharing space with growing sectors such as green energy and hospitality.

From those travels, I've learned, among other things, that service businesses long ago replaced retail outlets as anchors in downtown sectors; that clinics and senior living centers are popping up as the population ages; and that brew pubs and trendy restaurants play well in small towns that are looking for more cultural amenities.

Those are the views of a mere observer, of course, not an economist. And since I will be reporting for this project for at least another year, it seems like a good time to take a step back to get a broader perspective on what, exactly, makes up Minnesota’s economy outside the Twin Cities metropolitan region.

'Not your grandmother's economy'

Some of the most helpful research in this area comes from the University of Minnesota Extension, which has analyzed productivity and employment data from across the state in an effort to better understand how the rural economy ticks.

Brigid Tuck, an economic analyst for Extension, has led much of this research and has been sharing her findings with groups of all stripes; recently, for instance, she spoke to a group of faith leaders gathered at St. John’s University in Collegeville who wanted to know more about the makeup and direction of their communities.

In an interview with MinnPost, Tuck shared a phrase she likes to use on the road: “It’s not your grandmother’s rural economy anymore.”

To be sure, she said, agriculture and manufacturing remain strong drivers in many parts of the state and remain intertwined; many of the products built by manufacturers, she noted, are needed by the agricultural economy (such as these grain bins built in Lowry).  Farmers buy their seed locally, like they always have, buoying the local supply chain.

Moreover, while mining on the Iron Range faded from its glory days of the mid-20thcentury long ago, the industry still produces plenty of jobs – and remains resilient.

Yet a lot of the economic growth in rural communities has been in the health care sector and in technical and professional services, like accounting and engineering, that support other enterprises.  Other areas of strength include construction, government services and, not surprisingly, tourism. “Ag, of course, remains important to the economy, but it’s not the only thing we have going,” Tuck said.  “We’re seeing development in the service sector, we’re seeing health care and other services come out into our (rural) communities.”

Tuck sees more change ahead for the rural economy as technology allows more workers to live in Greater Minnesota, like this entrepreneur in Gibbon I recently profiled for MinnPost.  She hopes Extension’s research will help to provide an accurate picture of the economy for politicians and civic and business leaders.  “I do think perception is an issue,” she said.  “If you are going to thrive in Greater Minnesota, you need to have the perception that we are growing and that there are opportunities.”

Greater Minnesota has had an uneven recovery from the Great Recession, which curbed retail, especially, Tuck said. When I asked for a characterization of the rural economy right now, she said: “It’s doing OK.”

The state’s economic diversity in Greater Minnesota can be seen in the industries that lead the various regions of the state. Below is a look at the top three industries – based on both economic output and on employment – in 12 Minnesota regions that follow the geographic boundaries of the state’s Regional Development Commissions. The data, the most recent available, was compiled by Tuck and a research assistant using information collected by two economic modeling organizations. (Extension reports on the “economic composition” of each region that were published in 2014 and 2015 can be found here.)

As the rural economy has evolved in recent decades, so has the University of Minnesota Extension, the longtime public agency charged with “extending” the university’s expertise and knowledge into every corner of the state. In popular thought, that work has largely been in the realm of agriculture, with county agents – those scholar-farmers – working with local growers to apply best practices and science to their operations.

Over the past few decades, however, the agency’s mission has changed and broadened, along with rural life itself, from providing practical assistance for farmers and gardeners to creating educational offerings for families and conducting broader research on rural life. Even its name has gotten a facelift, changed in 2003 from the dry and utilitarian-sounding “Extension Service” that many Minnesotans might more easily recognize.

“The changes we have seen in Extension over the last 15 years have really been about changing to meet the needs of the state,” said Beverly Durgan, who has been the dean of the agency for 12 years.

Extension still has agents, and advisory boards, in each of Minnesota’s 87 counties. But these days, Durgan noted, farmers can find a wealth of information and support outside of Extension – through their own research on the web, for instance, or local co-ops. Today, Extension is just as likely to be involved in Main Street business research, tourism support (the University of Minnesota Tourism Center is part of Extension) and community leadership training.

The modern agency works in four broad areas under the umbrella of “centers”: Agriculture, Food and Natural Resources; Community Vitality; Family Development; and Youth Development. Extension faculty are drawn from several colleges at the university – from the College of Food, Agriculture and Natural Resources Sciences, for instance, as well as the Humphrey School of Public Affairs.

In rural areas, the agency’s work is mostly focused around economic health and adaptability. Its Center for Community Vitality, for example – through its research on small town economies – has helped to create a more nuanced narrative about small-town Minnesota, from one of decline to one of change and opportunity. (Some of its research has shown a ‘Brain Gain’ rather than a ‘Brain Drain’ in rural areas, with mid-career people moving to Greater Minnesota, often in search of less traffic and smaller schools for their children.)

Extension has also delved into the state’s changing demographics. One of its programs, for instance, helps Latino immigrants with financial literacy. Meanwhile, other projects include research on the economic impact of resort closures and a pilot program in Big Stone County (to be launched in August) designed to help local growers get more of their food to more Minnesota markets.

That mission is likely to evolve further as the agency continues to follow rural economic trends. “It’s our job to gather the data, do the research and help communities interpret the findings,” Durgan said, “and then support their decisions as they move forward.”