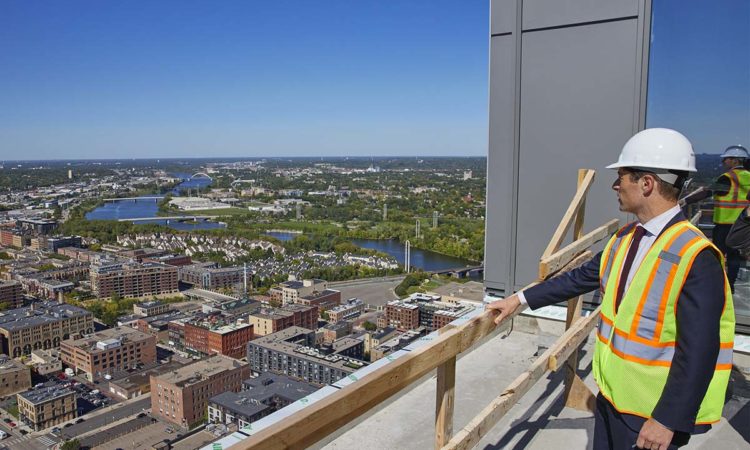 Minneapolis-based developer United Properties is one step closer to completing the 37-story RBC Gateway tower at the north end of the Nicollet Mall in downtown Minneapolis. Last week, United Properties hosted a gathering to mark the project’s topping out – a construction term that refers to when a building in progress reaches its full height. The event included representatives of United Properties, project partners, Minneapolis Mayor Jacob Frey, and other local officials.

The project is set for completion next year.

While downtown Minneapolis office vacancy remains high and took a further hit due to the pandemic, the RBC Gateway is a landmark project for downtown Minneapolis. The new tower will include a Four Seasons Hotel, the first-ever five-star hotel in the Twin Cities.

“As the first such high-rise project in downtown Minneapolis in two decades, RBC Gateway stands poised to make its mark not only on the downtown skyline, but on the broader community as well,” said Rick McKelvey, senior vice president of development of United Properties who has overseen the project since its inception, in a statement.

The city of Minneapolis had owned the property site, where the Nicollet Hotel once stood, for more than two decades. As redevelopment efforts came and went over the years, it served as a surface parking lot and bus layover station. It was generally considered an eyesore.

The building’s office space was already 85 percent leased when it broke ground in the summer of 2019.

The building’s 525,000 square feet of Class A office space is now 95 percent leased. The building is anchored and named for RBC Wealth Management-U.S., which is leasing 310,000 square feet. Other tenants include the Pohlad Companies, which owns United Properties.

At this point, only 20,000 square feet of office space remains available for lease.

At the top of the tower there are 34 high-end condo units, billed as Four Seasons Private Residences.

The office building is slated to open in the first quarter of 2022, while the restaurant and hotel will open in the second quarter of the same year. The condos, meanwhile, won’t open until 2022’s third quarter.