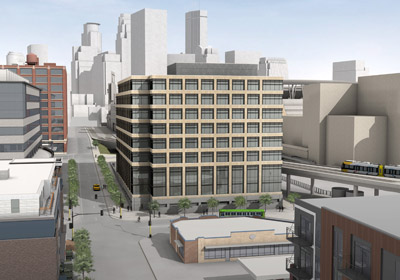 Bloomington-based United Properties announced plans for Target Field Station Center, a new 10-story, 240,000-square-foot office building in the North Loop area of downtown Minneapolis. At this point United Properties is pressing ahead on a speculative—or “spec”—basis: without any leases inked with tenants.

United Properties has been busy in the North Loop area where its projects have included the renovation of Ford Center and the Loose-Wiles Building, two vintage brick and timber buildings. United Properties is also under construction on another 240,000-square-foot office project in North Loop, the new headquarters for the Be The Match nonprofit. That project, at 500 Fifth St. N. in Minneapolis, is slated to be complete in late 2015. The Target Field Station Center site, which does not yet have an assigned address, is directly across the street from the Be The Match project.

“We do plan to go spec on this,” Katter confirmed. But he noted that it’s possible that United Properties could have some leases in place by the time construction starts next year.

The new plans are already drawing strong interest. Katter says that commercial real estate brokers began trying to reach him as soon as the news was announced on Wednesday morning: “They started calling this morning when this thing hit the wire,” Katter said.

Spec office development has been rare in the Twin Cities since the Great Recession. Office projects under construction locally are almost exclusively build-to-suit deals tailored to specific tenants or owners.

The plan for Target Field Station Center calls for United Properties to acquire the 0.75-acre site at the southeast corner of Sixth Avenue North and Fifth Street North from Hennepin County. United Properties still needs to secure city approvals for the development plan. The current timeline envisions breaking ground in the fall of 2015 with completion set for late 2016 or early 2017. Katter declined to discuss rental rates for the new building.

Houston-based Hines is floating plans for another spec office project in the North Loop area, the 210,000-square-foot T3. The proposal is up for discussion on Thursday before the Committee of the Whole of the Minneapolis City Planning Commission. No votes are taken at Committee of the Whole meetings, which are meant as a forum for developers to gather early project feedback from planning commissioners.

“I think they both could be successful,” said veteran office broker Jim Damiani, senior vice president with Colliers International, of the Hines and United Properties plans, noting that there’s not much space currently available in North Loop.

A recent market report from the local office of Colliers International reported overall office vacancy in downtown Minneapolis at 12.7 percent, lower than the 14.2 percent vacancy rate across the Twin Cities at the end of September. But according to the Colliers report, Class A vacancy in downtown Minneapolis stood at an even tighter 9.6 percent at the end of the third quarter. That’s significant because developers traditionally have confidence to move ahead with new office projects when vacancy rates dip below 10 percent.

Katter said that a 10 percent vacancy rate is considered the equilibrium point between landlords and tenants in the office market.

“No question about it: when it gets there developers start thinking about spec space,” Katter said. He adds that the allure of North Loop site includes proximity to Target Field, transit connections, housing and affordable parking.

In mid-October, the city of Minneapolis issued a request for proposals for the Nicollet Hotel Block at 30 Third Street South at the north end of the Nicollet Mall. The city has owned the property, which has been used as a parking lot and bus layover site, since 1993. The city’s new call for development proposals seeks mixed-use projects that are at least 20 stories tall, which could combine potential office, retail, housing, and hospitality elements. The deadline for proposals is December 11.

“I think it’s great news. Our goal was always to maximize the use of that property and just expand on the investment of light rail and the Target Field Station,” Opat told Twin Cities Business on Wednesday. “It’s good to have another building that fits in and works with that neighborhood.”

J. Michael Noonan, senior department administrator with Hennepin County, said that the county’s agreement calls for United Properties to pay $15 per gross square foot of the ultimate development on the site. Noonan said that a 240,000-square-foot project would translate into a price of $3.6 million for the site, but the price could be higher depending on the calculations of the gross square footage of the project.