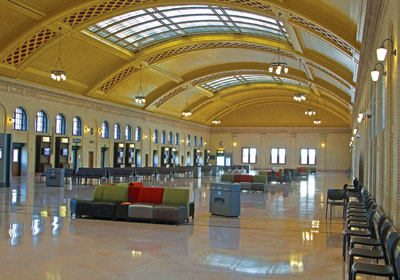 Union Depot’s Open, But Trains Remain A Long Way Off

According to the building’s owner, the complexity of connecting the depot’s tracks to the freight railroads that surround the complex accounts for the delay.
By Steve Glischinski
April 01, 2013

St. Paul Union Depot opened to much fanfare on Dec. 8, 2012, after a two-year, $243 million renovation. The depot began serving Metro Transit buses in December and Jefferson Lines in January. But the one passenger train that the edifice was renovated to serve, Amtrak’s Empire Builder, won’t begin stopping there until the fourth quarter of 2013 at the earliest, because the building is isolated from the rail network that surrounds it — and it will cost north of $10 million to connect it.

According to the building’s owner, the Ramsey County Regional Railroad Authority (RCRRA), the complexity of connecting the depot’s tracks to the freight railroads that surround the complex accounts for the delay. It’s a veritable festival of corporate and regulatory bureaucracy, requiring three railroads, Amtrak, and the Federal Railroad Administration (FRA) to get the job done. Discussions began in 2001, but how to connect the depot to the rail network didn’t receive serious consideration until 2010, when funding came through.

Tim Mayasich, director of the RCRRA, says the depot project finished early and under budget except for the Amtrak connection. “The more we got into conversations with our partners on the freight railroad side, the FRA, and Amtrak, it became evident that this is a highly complex project . . . [a] much bigger project than what we had initially anticipated.” Design of signal systems and debate over which railroad would control and dispatch the depot tracks had to be resolved before new rail connections could be built.

Mike Rogers, senior transportation planner for the RCRRA, said progress is being made. “We’ve got some of the complexity cleared up, particularly on who will dispatch it.” (BNSF Railway will). Mayasich says the RCRRA is working through engineering and will soon move into final design. The three railroads involved will do construction, and if all goes well the Empire Builder should roll into the station for the first time in fall. Or maybe winter.