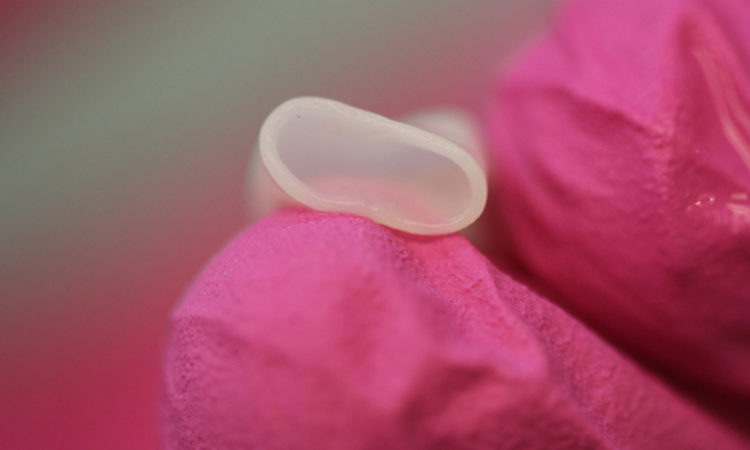 Vascudyneâs implantable heart valve, made of a new kind of living tissue. (Photo courtesy of: Tranquillo Lab, University of Minnesota)

Based in Stillwater, Vascudyne is dedicated to developing a special type of tissue made from skin cells. Preclinical studies suggest the biologically engineered tissue is capable of healing itself and even growing with the patient since it shares properties similar to the tissue in a human body.

Vascudyne is advertising its technology as having regenerative capabilities unmatched in the market today. The new tissue has the potential to transform the medical device and therapeutics markets, the U of M said, which are both being hampered by synthetic tissues that are limited by their supply, durability, and hemocompatibility constraints.

“We are excited about the prospects of this material [becoming] a clinical reality with its commercialization by Vascudyne,” said Dr. Robert Tranquillo in a statement.

Tranquillo is a professor in the U of M’s departments of Biomedical Engineering and Chemical Engineering & Materials Science, both of which are housed in the College of Science and Engineering. It’s his discoveries — made with the help of lab researchers Zeeshan Syedain and Lee Meier — upon which Vascudyne’s technology is based.

The tissue being developed by Vascudyne is based on decellularized collagenous tissue grown in a bioreactor from a natural protein found in fibrin gel. The technology has already received several patents and the preclinical studies, in which the tissue was used as a vascular graft (other studies involved a heart valve), were published in Nature Communications and Science Translational Medicine.

Luke Brewster, assistant professor of surgery in the Vascular Surgery division at Emory University’s School of Medicine, said Vascudyne’s new tissue could become the new standard for cardiovascular replacement parts. That’s crucial because, as Brewster said, the need for such parts is greater than ever and expected to grow substantially in the near future.

“Biologically compatible replacement tissue for cardiovascular disease is the Holy Grail for patients and clinicians, who have not seen a full step forward in these technologies since the 1950s,” said Brewster, who was not involved in developing Vascudyne’s technology. “Professor Tranquillo’s innovative cardiovascular tissue platform is well positioned to help the field take this important step into the future.”

Vascudyne will initially focus on commercialization of two engineered tissue products: a new generation of small-diameter vascular conduits, and a transcatheter-delivered valve for right-side heart applications. These projects are in planning for preclinical studies in 2019, after which they will be submitted for early clinical trials.

The University’s launch of Vascudyne marks the first phase of the startup’s development plan, which involves transitioning the technology and operations from the University to the company’s Stillwater facility. Vascudyne has also implemented pilot-scale manufacturing capabilities for using its tissue in preclinical animal studies and first in-human clinical trials.

Moving forward, in addition to the development of the two initial products, Vascudyne is looking to implement its tissue material into other medical devices designs. Commercial clients are currently invited to reach out to Vascudyne if they are interested in incorporating the company’s tissue in their own medical device technology.