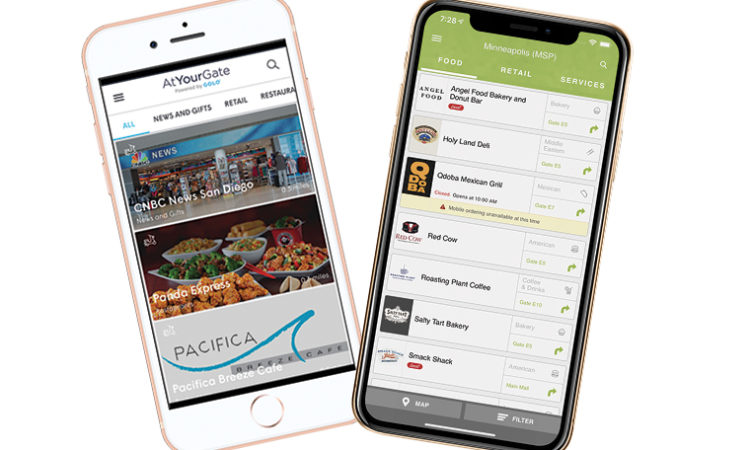 AtYourGate and Grab make dining on the fly more convenient.
By Amanda Ostuni
May 09, 2019

When flying, the only thing worse than long security lines is not having enough time to eat before boarding. But two apps new to Minneapolis–St. Paul International Airport aim to expedite airport dining, eliminating at least some hassle.

With AtYourGate, travelers can order food from airport restaurants and have it delivered to their gate or other listed location. Similarly, Grab allows users to preorder and prepay for food they pick up. Customers are given an estimated completion time for their order. Both apps, which are free and available on Apple and Android devices, currently work with a handful of airport restaurants, and more are expected to come on board.

“If we’re getting people to prepay or having products delivered direct to the gate … you might entice people to spend [money] when otherwise they wouldn’t have,” says Liz Grzechowiak, the commission’s assistant director of concessions and business development.

Digital ordering tends to raise the average ticket value, says Mark Bergsrud, CEO of Houston–based Grab, which is available at more than a dozen airports in the U.S. and U.K.

“We think our airport partners are missing [transactions] due to [customers’] time constraints,” Bergsrud says.

AtYour Gate guarantees 30 minutes or less, for a $2.99 fee. They’ve even delivered to travelers already on board the plane.

“We’re saving folks time, stress, there’s a convenience factor, and it’s a personal touch,” says PJ Mastracchio, founder and CEO of AtYourGate, which has expanded to six airports since debuting at San Diego International Airport in 2018.

Mastracchio says airport employees and flight crews make up 50 percent of AtYourGate customers, but a lot of families and business travelers also use the app.