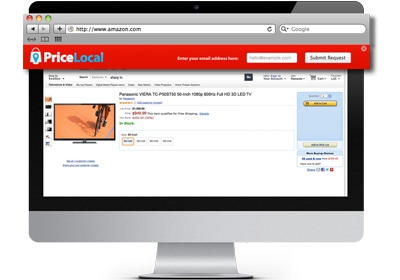 PriceLocal looks to even the e-commerce playing field with a service that allows consumers to price-match products with nearby retailers.
November 19, 2015

A new online service called PriceLocal, which allows shoppers to browse Amazon and then price-match desired items with local retailers, launches in the Twin Cities on Tuesday.

Matt Chosid, founder of the website, said the ultimate goal of the service is to re-incentivize consumers to support local business over online giant Amazon. Moreover, he believes his service will provide a simplified and quick alternative to connecting shoppers with immediately available products they can pick up at a local store.

“Retailers get a text message that links to the app and they respond right there,” said Chosid. When testing the service in Ann Arbor, Michigan last year, he said, “we’d have stores that would respond in as little as a minute. And if they don’t have the item or they can’t offer that price, they also have the option to offer a similar item at that price.”

According to Chosid, the initial testing in Ann Arbor (a town of 117,000) received “a terrific response from consumers and retailers alike” with thousands of residents utilizing the service.

The PriceLocal founder said he began work on the web application after losing his job four years ago with Borders, which originated in Ann Arbor. “At Borders, we were definitely one of the first places to see super strong competition from Amazon,” he said.

Additionally, in a study last month, research site Survata found that 44 percent of U.S. consumers use Amazon as their go-to when researching and price-checking products. “People are becoming more educated consumers,” Chosid said. “We just want to promote fair competition and equal price.”

PriceLocal is currently taking open enrollment for all Twin Cities residents and retailers. To partake, download the PriceLocal application from its website. (At launch, the web browser extension is only available for Chrome, Firefox and Safari.) Customers can then shop Amazon and, when prompted, click a ‘Submit Request’ box at the top of the webpage. If a retailer accepts the price-match, a coupon can be printed or accessed from a mobile device to honor the deal in-store.

PriceLocal only works for items offered under Amazon’s Prime program. Twin Cities retailers can join the price-match service by registering at PriceLocal’s site.