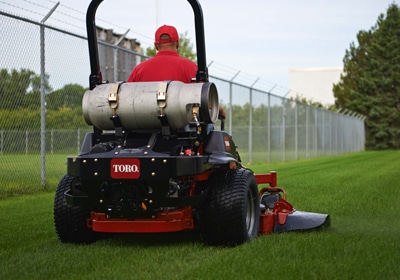 A lack of snowfall provided a substantial push to the company’s sales of professional lawn maintenance equipment and products.
December 18, 2016

The Bloomington-based manufacturer of lawn and turf maintenance equipment reported on Tuesday earnings of $231 million, or $2.06 a share, for its fiscal year ending October 31. The result was a 14.6 percent improvement over Toro’s fiscal 2015 year of $201.6 million in earnings.

However, the company’s sales were not as strong, sinking 2.6 percent in the fourth quarter from $480.8 million a year ago to $468.4 million. Analysts had also predicted a year-over-year sales loss with their estimate of $477.6 million.

For the full fiscal year, sales rose less than 1 percent to $2.39 billion.

“New product introductions across the portfolio were favorably received and we made notable progress in reducing our inventory levels,” said Toro CEO Richard Olson in a statement. “Despite challenges presented by negative currency conditions and a lack of in-season snowfall, we benefitted from solid demand for our golf equipment and irrigation products and we gained share in those markets.  Similarly, we saw increased momentum in our landscape contractor, specialty construction and rental businesses due to the success of new products.”

Due to lackluster snowfall at the start and end of 2016, Toro’s residential business sector reported a year-over-year drop in sales (down 7.8 percent) and earnings (down 13.3 percent) for the year. Yet, the longer mowing and lawn care season was a boon to the company’s professional business sector, which reported year-over-year increases in both annual sales (up 4 percent) and earnings (up 14.3 percent).

For fiscal 2017, Toro expects its revenue to grow by about 3 to 4 percent, placing net earnings between $2.20 and $2.26 a share. The company’s estimation fell directly in line with Wall Street’s full-year estimate of $2.23 a share.

As for its first quarter, Toro is anticipating earnings per share of 34 cents to 36 cents—again, in line with Wall Street’s estimate of 36 cents a share.

“As always, we recognize that unfavorable weather conditions could negatively impact demand throughout the year,” Olson said, “but we will maintain a steady approach in executing our initiatives in the months ahead.”

News of the positive fourth quarter and fiscal 2017 outlook have lifted Toro shares 6 percent from Wednesday's close of $54.43 to $57.64 as of mid-day Thursday.