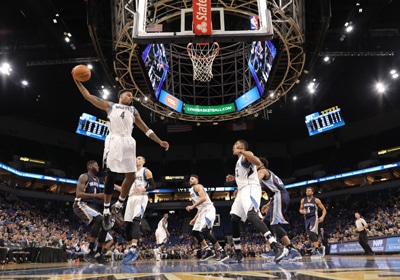 This marks the first partnership the basketball organizations have made with a Chinese business since Lizhang Jiang became a minority stakeholder in the summer.
By TCB Staff
November 03, 2016

The Minnesota Timberwolves and Lynx added a new member to its partnership roster on Monday.

The Creative Life, otherwise known as TCL, is the new “official TV” of the professional basketball franchises, starting with the Timberwolves 2016-2017 season. TCL has signed on to a long-term partnership with both organizations.

“TCL is a rapidly growing company looking to bring its global success here to the U.S. and we look forward to bringing their brand to life in this market,” said Timberwolves and Lynx chief revenue officer Ryan Tanke in prepared remarks. “It’s also a very natural fit with both of our organizations’ ties to China.”

Last June, Timberwolves and Lynx owner Glen Taylor sold minority stakes of the Timberwolves franchise to New Jersey real estate developer Meyer Orbach and Shangai investor Lizhang Jiang. With that deal, Jiang became the first Chinese owner in the NBA and, according to Tanke, it has improved the Timbwerwolves and Lynx organizations’ ability to draw in overseas business.

Huizhou, China-based TCL claims to be America’s fastest-growing TV brand and the third-largest TV manufacturer in the world. The company reported upwards of $15 billion in revenue last year.

For more on Glen Taylor and how he views the past, present and future of the Timberwolves and Lynx organizations, read the Q&A feature in TCB’s November issue.