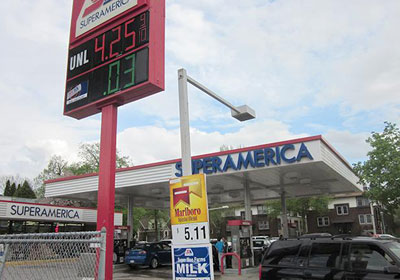 This Is How You Get A Gas Tax Hike Passed

In 1988, the Legislature passed the largest transportation-funding package in its history. Here's how it was done.
May 22, 2015

In 1988, thanks in no small part to Levine, the Legislature passed the largest transportation-funding package in its history — $390 million over three years, or roughly $800 million in today’s dollars.  The gas tax increased from 17 cents to 20 cents a gallon.

But that happened only after 17 months of legislative lobbying, public-relations stunts, and retail politics, much of it executed by Levine.

To demonstrate how bad the roads were in Mankato, for example, Levine got wired with an EKG monitor and went for a ride in an ambulance. “The roads were so bumpy, you couldn’t read the EKG at the end of ride, so imagine if I were a real patient,” Levine said.

“I went to areas of the state where there were accidents, tragic fatal accidents,” he said. “I talked to chamber groups, I went to schools in every congressional district and talked about the infrastructure and how those about-to-be drivers would benefit. It had an impact.”

Even adjusted for inflation, it’s a bigger hike than Levine helped pass in 1988, and consumers have made their opposition known. A March Star Tribune poll found 52 percent of adults opposed raising the gas tax to pay for transportation needs, while only 45 percent supported it.

“It’s very difficult to get an increase in transportation funding,” said Levine. “It turns people off because they don’t know what they get for it.”

Convincing the Legislature is more difficult, Levine said. Although DFLers controlled the Minnesota House in 1988, to get enough votes for passage Levine and his deputies hosted one-on-one lunches with lawmakers. “I made the argument that the road doesn’t know if it’s Democrat or Republican,” he said.

The Minnesota House would not approve another gas tax hike until 20 years later, after the collapse of the I-35W bridge in Minneapolis.

With less than a week until the end of the legislative session, Republican Speaker of the House Kurt Daudt maintains that the gas tax is a nonstarter. Senate Majority Leader Tom Bakk has suggested that the Legislature need not consider either a tax bill or transportation bill this session.

That puzzles Levine. “There seemed to be consensus that there needs to be improvement,” he said. “I would be hopeful that they will come up with some kind of compromise.”

But, he said, a substantial funding package may be unobtainable. “A slight tax increase — it might work,” he said.

Even a road warrior like Levine acknowledges that the gas tax remains a toxic topic.