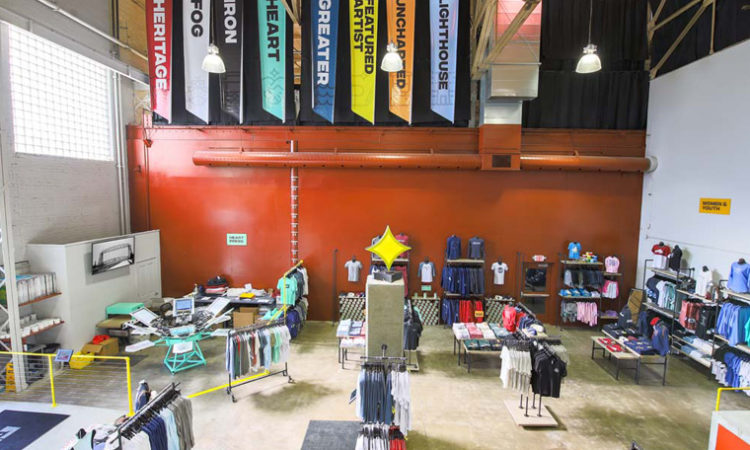 Ian and Mary Scherber currently works with about 20 local artists at Flagship, their local-focused retail shop in Duluth.
By Gene Rebeck
July 28, 2018

You can think of Flagship, the new clothing retailer in Duluth’s Canal Park, as founder Ian Scherber’s valentine to his hometown. The screen-printed T-shirts and hoodies, as well as its distinctively designed caps and bags Flagship makes, aren’t designed to be cheap souvenirs that tourists might buy on a whim and then rarely wear. Scherber and the local artists that have designed the images printed on the clothing want to forge a deeper cultural connection between the wearer and the Lake Superior city. And for Scherber and his crew, Duluth’s industrial history is as much a part of that connection as are the pines and the big lake itself.

Flagship launched on July 4, and while Scherber is only 24, the store is not his first venture. While still in college, the compulsively entrepreneurial Scherber, a native of the nearby city of Proctor, had founded Duluth Screen Printing, which manufactures custom-printed T-shirts and other casual garments for businesses locally and nationally. A few years back, he and his now-wife, Mary Scherber, started another business, Neverest Outfitters, which made packs and bags for outdoor use. Their business provided the Scherbers with some extra cash to build up the screen-printing business. It also gave them time to consider their next move.

During some overseas travel, the Scherbers found some retail inspiration and decided to start something equally creative back in Duluth. Ian’s first idea was to put a shipping container on the boardwalk on Canal Park that would house the work of local artists—selling “really cool printed merch that presents the city in a great way,” he says. He couldn’t get that concept to work, “so that forced us to think outside the box.”

That’s when he got wind of a former motorcycle shop on Canal Park. The building, which dates back to the late 1800s, was originally occupied by a metal fabrication business. “The space was so industrial,” Scherber says. “It had a unique vibe of manufacturing and shipping.” It was just the right place for creating a store that includes screen-printing machinery while showcasing local artists and designers with “T-shirts that tell a story,” Scherber says.

The “stories” that these artists tell typically incorporate a love of local history. One such shirt at Flagship features the twin water towers on the former Marshall-Wells Hardware building, which now houses a hotel and Hoops Brewing. (Locals have nearly the same sentimental connection to those towers as they do for the more famous Aerial Lift Bridge.) Flagship currently works with about 20 local artists, and it will be adding new designs—and designers—over time.

Flagship’s interior space, which the Scherbers designed, includes walls reminiscent of the hull of an ore freighter. And Ian was able to get his container after all: The 40-footer now sits inside Flagship, and it’s being converted into meeting and office space for local business Duluth Screen Printing.

Though focused on Flagship and its screen-printing operations, Scherber and Rumpca—along with their extensive network of friends, partners and employees—are contemplating new businesses that they want to pursue in the near future.

“We are a young group of entrepreneurs and creatives that came together and want to do unique and fun things for Duluth,” Ian Scherber says. “We want to keep talented university graduates here and to help them develop really cool ventures in Duluth.”

Flagship might well be just the first of a fleet. 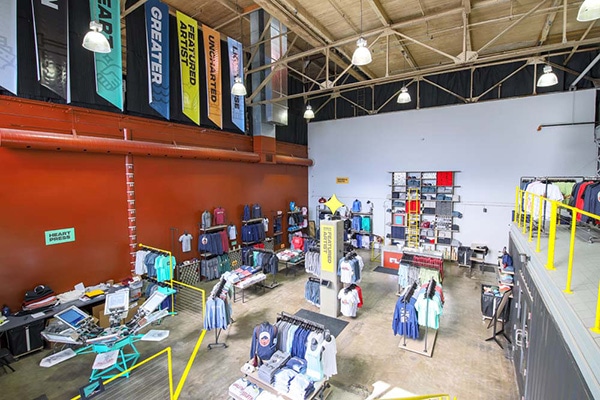 Flagship operates in a space formerly used as a motorcycle shop. (Photo courtesy of Flagship)