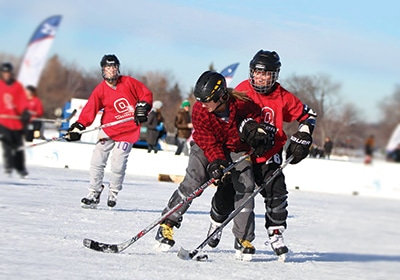 The Quintessence of Winter

Introduce your out-of-town clients to the unique pleasures of a Minnesota winter.
February 01, 2017

Give your out-of-town clients something to write home about with a visit to the Saint Paul Winter Carnival (January 26-February 5, wintercarnival.com). Founded in 1886, the carnival is the oldest winter festival in the U.S. and the grande dame of St. Paul events. Bundle up and join the revelers for the official kickoff at the Moon Glow parade downtown on January 26. Enjoy a cold Summit beer in the ice bar in Rice Park and watch the ice skaters before strolling over to the picturesque St. Paul Grill (stpaulgrill.com) for dinner. Order the signature tenderloin sandwiches and hash browns with bacon and onions, but save room for a couple of Winter Carnivals—steaming coffee with Baileys, Tia Maria and cocoa topped with whipped cream.

If your clients are hockey fans, cut out of the office early January 27 for the final day of the U.S. Pond Hockey Championships (January 26-29, uspondhockey.com). Head over to Lake Nokomis, where the ice is dotted with two dozen hockey rinks filled with former NHL stars, rink rats and other die-hards competing for the Golden Shovel, the Stanley Cup of pond hockey. Start with a couple of beers in the Labatt Blue Zone tent, named one of the top 51 hockey bars in the world by Pond Hockey Brew, and then slide over to the Sundown Showdown, a winner-take-all tournament. Unless you’re compelled to stay until the freezing end, head over to the Town Hall Tap (townhalltap.com), a two-minute drive from the lake. Warm up with pints of award-winning Hope & King Scotch ale and locally made Chicago Avenue onion beer bratwurst and a basket of pub fries.

For an only-in-Minnesota experience, take your clients out to Lake Waconia on January 28 for the first full day of the 27th annual Waconia Snowmobile Show (January 27-29, mwvss.com). Mingle with snowmobilers from around the country, watch vintage sleds compete in side-by-side drag racing on the ice and browse the world’s largest vintage and antique snowmobile show/swap meet. Once you’ve had your fill, head over to Lola’s Lakehouse (lolaslakehouse.com) on the shores of Lake Waconia for buffalo chicken wings, stone-fired pizza and other specialties.

Even if your clients have never strapped on a pair of cross-country skis, snowshoes or speed skates, the City of Lakes Loppet Ski Festival (February 3-5, loppet.org) is a fun way to experience local winter culture. Festivities begin on Friday with the 25K speed-skating loppet on Lake Calhoun, followed by the Finn Sisu Sprints. In between the races, quench your thirst in the Surly Beer Garden in the Loppet Village by the Lake Calhoun Executive Center. Afterward, head west on Lake Street to Lake and Irving restaurant (lakeandirving.com) for the savory, shoyu- braised short ribs with sweet potato mash and fried Brussels sprouts with white soy and togarashi.

If the last time you played golf with your clients was on turf, it’s time for a new challenge. Show up on the shores of Wayzata for the Wayzata Chilly Open (February 11, wayzatachillyopen.com), an annual golf tournament/chili cook-off on frozen Lake Minnetonka. Grab a couple of hockey sticks and hit tennis balls around a nine-hole course carved into the ice, and enjoy live music and more than a dozen varieties of chili prepared by local chefs. After you’ve hung up your sticks, repair to the bar at CÅv (covwayzata.com) for a restorative glass of Glenlivet as you watch the sun set over Wayzata Bay.