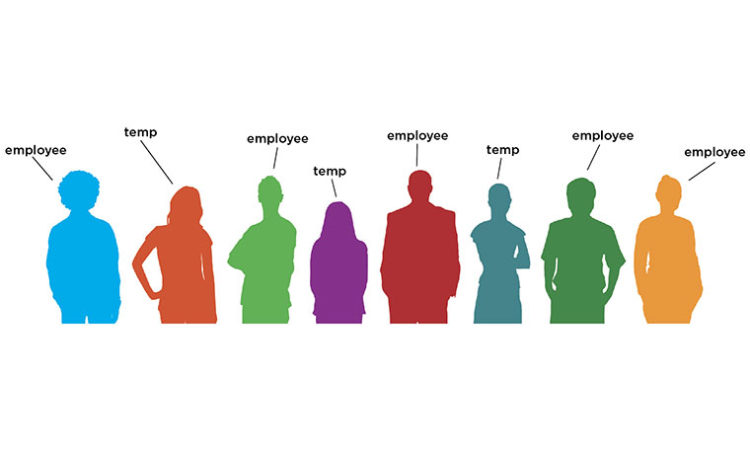 The Dilemma of Independent Contractors

Is this a staffing solution that employers need or are they creating a permanent labor underclass?
By Linda L. Holstein
September 03, 2019

Every workplace has one, and most have several. “Temps,” “self-employed workers,” “freelancers,” and “contingent laborers” all fall under the rubric of individuals hired on a temporary basis to presumably work on a specific or time-limited project.

Historically, employers’ biggest legal worry about such staffing was how to carefully avoid misclassifying anyone as an independent contractor if she were, in fact, an employee. Tax withholding, immigration laws, unemployment compensation, workers’ compensation, and federal and state anti-discrimination laws all come into play when a company misclassifies a worker as “independent.”

Most chilling for employers is the power of the Wage and Hour Division of the U.S. Department of Labor, which administers the Fair Labor Standards Act. FedEx, for example, paid over $400 million in multiple class-action lawsuits over the last five years to drivers who were owed overtime because they were actual employees as defined by the FLSA. They were not, as their written contract with FedEx called them, “independent contractors.”

Adding to the risk and frustration for employers playing the high-stakes classification game is the legal conundrum of the factor test. What factors, in other words, will a court or regulatory agency look at to determine whether a worker is truly independent? The IRS has a 20-factor test; the Minnesota Supreme Court uses a five-factor test. The Wage and Hour Division of the U.S. Department of Labor looks at whether a worker is economically dependent on an employer by using a six-factor test established by the U.S. Supreme Court. All of these legal constructs, however, start with an examination of how much control the company has over the worker—where you work, when you work, how long you work, and whether you can work for anyone else at the same time.

Enter Google. As of March, Google worked with 121,000 temps and contractors around the world, compared with 102,000 full-time employees on its payroll. Those numbers come from a verified internal Google document obtained by the New York Times. People desperately want to work at Google even without paid vacation and health benefits, for less money than their colleagues are paid, and without a color-coded name badge that lets others know you’re a real full-time “Googler.”

How Google has seemingly avoided massive class-action lawsuits like those suffered by FedEx is best illustrated by examining another Silicon Valley company, OnContracting. The OnContracting website describes the company’s mission as providing “an online directory of U.S. staffing agencies that help job seekers find temporary contract jobs by giving them insider information about which staffing agencies place contractors at which Fortune 2000 companies.” Thus, should a highly skilled engineer who’s been shut out at Apple just allow himself to be connected to the right staffing agency that Apple depends on (and OnContracting knows about), he can get hired and call himself an “Apple engineer.”

Except that’s not his employer; the staffing agency is. And he’ll generally have the job for just 18 months. The layering tactic—putting a whole ecosystem of entities between you and your worker—is not new, but it has evolved far beyond what the workplace thought of as a “temporary staffer” brought on during someone’s maternity leave.

OnContracting estimates that a technology company “can save $100,000 a year on average per American job by using a contractor instead of a full-time employee.” That’s what the founder of the service told the New York Times, after which he rather wryly observed that overuse of contractors is “creating a caste system inside companies.”

Before FedEx was forced to change its classification scheme in 2011, it contracted directly with ground and home delivery drivers. The written contract that FedEx used was harshly criticized (and struck down) by several courts, including the Kansas Supreme Court, which called it “brilliantly drafted … to create the constraints of an employment relationship in the guise of an independent contract model—because FedEx not only has the right to control, but has close to absolute actual control over the drivers.”

The clever but deceptive contract was very valuable to FedEx, particularly because its main competitor, UPS, employed over 265,000 Teamsters union workers at the time the lawsuits were filed. While organized labor, now just barely 10 percent of the U.S. workforce, offers a decreasingly less popular safeguard for American workers, the spread of the independent contractor “movement” has gone relatively unnoticed. FedEx, like Google, now contracts with several middleman companies, allowing it to, as lawyers like to say, “remain flexible.”