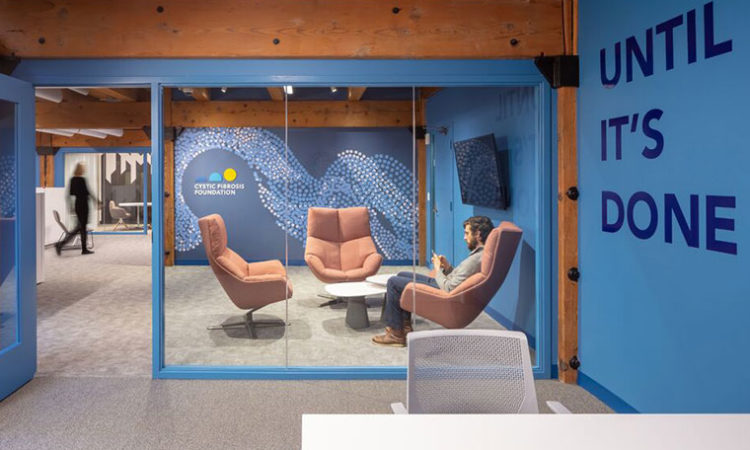 “We’re all about telling stories with spaces and for non-for-profit work, there are so many stories to tell,” Vohs said.

The Minnesota/Dakotas Chapter gets a fresh space thanks to Studio BV's new nonprofit division.
By Ana Diaz
May 01, 2020

“Design changes everything” is Betsy Vohs’ mantra. The CEO and founder of Minneapolis design firm Studio BV has lent her expertise to nonprofits since launching her company in 2015, but as the requests accumulated, Vohs decided to create Design Forward by Studio BV, a division working with nonprofits at a reduced fee or no cost. One of the first projects to come out of that division is a new office for the Minnesota Chapter of the Cystic Fibrosis Foundation. Studio BV took its cues from the genetic disease itself: People with cystic fibrosis have difficulty breathing, so designers created a healing atmosphere. The open work area features angled panels that mimic the softness and rhythm of breath. The principal color is blue, which Vohs picked because she says it conjures images of breath, water, and life. Several partners collaborated on the project, including Fluid Interiors, Carlson Partners, and Gardner Builders; virtually all products and services were donated. “When you change the environment, the space people are working in, the doors open up,” Vohs says. “It’s really a lever to grow the organization.”