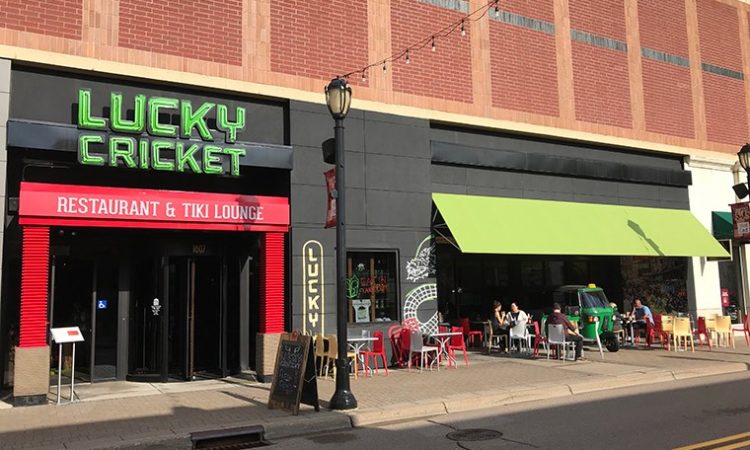 When the Andrew Zimmern-fronted Chinese restaurant Lucky Cricket at the Shops at West End closed July 4 for “two weeks” of renovations—and remained closed for another five weeks with dead silence from the proprietors—the local restaurant rumor mill ramped up to eleven. Cricket was pronounced dead due to a variety of self-inflicted wounds, from Zimmern’s trash talking of local Chinese restaurants to being $1 more expensive than nearby Yangtze for dumplings.

But the eatery officially reopened Monday without any dramatic flourishes. No searchlights were rented. Zimmern was on a plane to Washington, D.C. So what was going on there all summer? Basically, a management change and modest reconcepting.

Lucky Cricket opened to staggering crowds last Thanksgiving week and was beset by all manner of stress-induced operational problems through New Year’s. Business crashed during the polar vortex and only modestly rebounded after winter’s end. By spring, it was apparent to lead investor Mike Outlaw that the concept needed a reset.

“The restaurant was not doing well, so we felt that a change in operators could be helpful,” he told TCB. The operating group fronted by Michael McDermott (Rojo Mexican Grill et al) were ousted for a crew handpicked by Outlaw, who owns the Axel’s restaurant group and several concepts in other cities.

Actual renovations were modest, though the bar was “de-tiki-ed” and de-kitchified to feel more congruent with the modern dining room. The biggest changes were to the menu, which was pared back and broadened from a largely Chinese-influence to multi-Asian. “It should be fun, adventurous, hip,” says Outlaw. “That’s the brand filter.”

The changes take Cricket out of direct competition with area Chinese restaurants and into a more singular brand space. Prices have been tweaked downward, says Outlaw, and the service style is now typical of western restaurants (food served by course) than Chinese restaurants. The menu now contains familiar entry points like egg rolls and lettuce wraps, but also some edgy Zimmern signatures like pig ears and head-on shrimp.

Reopening during the slow State Fair weeks was deliberate. Lucky Cricket hopes to fly under the radar for a few weeks before the busy fall dining season. Outlaw, who has a corporate background at Hard Rock CafÃ© and Dave & Buster’s emphasizes the need to reposition the restaurant: “I came in with some different ideas. We couldn’t close and reopen with the same things. … We’re not competing with mom and pops. They may be better, they may be worse. We wanted to be different.”

Outlaw says his investor group pondered whether the restaurant needed a complete rebrand/revamp but decided that it had been open for too short a time to introduce itself to a critical mass of local diners. “We still have an opportunity to make many, many first impressions,” he says.

No one in the investor group believes the November media-fueled cultural appropriation brouhaha had any bearing on the restaurant’s financial performance, pinning that entirely on poor execution of food and service. Outlaw notes, incidentally, that he was born in Taiwan and his Asian mother has a background in restaurants.