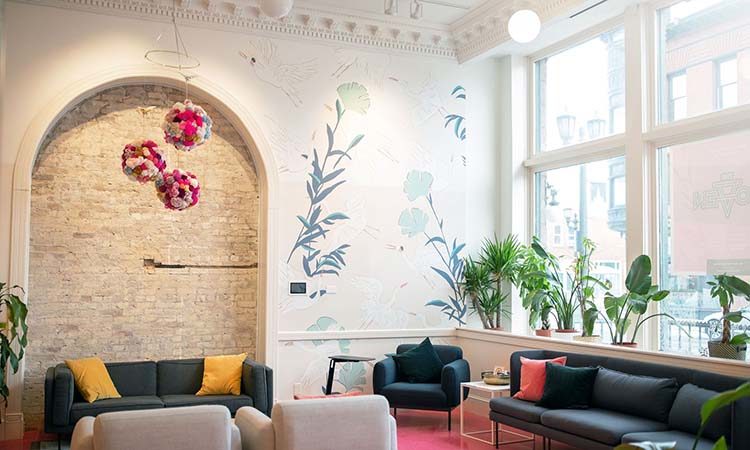 The inclusivity-focused coworking company has submitted paperwork to franchise the business nationwide.
By Dan Niepow
October 21, 2022

Twin Cities-based coworking space The Coven is gearing up to expand nationwide. On Monday, the inclusivity-focused company completed its franchise disclosure document, a move that CEO and co-founder Alex West Steinman says will enable the firm to open franchises in other states. She describes it as “the spellbook that contains all the magic it takes to open a Coven.”

Today, The Coven operates two coworking spaces: One in Minneapolis and one in St. Paul. Steinman said she formally submitted the disclosure document in Indiana and Michigan. For now, she’s interested in moving into “underdog cities that are just like the Twin Cities.” But The Coven could submit the document in any state and open franchises elsewhere.

At a time when many businesses are abandoning or significantly altering their office footprints, it may seem unusual to franchise a coworking company. Just this week, Minnetonka-based insurance giant UnitedHealth Group put one of its main offices up for sublease, the Minneapolis-St. Paul Business Journal reported.

But Steinman only sees opportunity. She said The Coven has seen a 400% year-over-year increase in memberships. Team sales — bulk memberships for organizations — have played a significant part in that growth. As companies exit formal office environments, coworking spaces might be a feasible alternative for some.

“We’re extremely confident in this model and our ability to expand nationally,” said Steinman, who formally launched The Coven in 2017 and opened her first space in 2018. “Let me tell you, if we can survive a pandemic, we can survive anything.”

The model survived, she said, because of strong support from the community. “People wanted to keep their membership even when they couldn’t access the space because they believed in the mission.”

She also maintains that The Coven provides more than a place to work. The company offers a mix of in-person and virtual programming and events catered toward women and nonbinary and trans people. “We see it as an added value and a benefit to being a part of our community,” Steinman said.

Still, by many accounts, the coworking industry is in uncertain territory. One needs to look no further than New York City-based coworking company WeWork, whose rise and fall has been the subject of numerous podcasts and documentaries. Steinman, of course, doesn’t see The Coven succumbing to the same fate. She’s aiming for slow, sustainable growth.

“I think that one of the challenges that faced a lot of coworking spaces pre-Covid is that they grew too fast in cities with extremely high rent,” she said. “It just wasn’t a sustainable model long term.”

The starting fee to launch a Coven franchise is $50,000, according to the company’s franchise disclosure document.

For Steinman, franchising the business is another small step toward equity. It’s a chance at business ownership for often-underrepresented groups, she said.

Late last year, The Coven became one of the first coworking operators to offer primary care to its members.