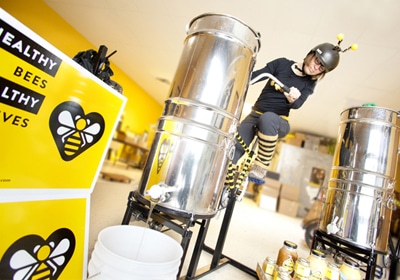 Kristy Lynn Allen, owner of The Beez Kneez, quickly discovered that her business’ survival would rely on efforts beyond simply selling its product.
October 08, 2015

In an era with a plummeting honey bee population (down as much as 70 percent in Minnesota, according to the state’s Pollution Control Agency), making a livelihood from beekeeping requires dedication. According to Kristy Lynn Allen, “it’s definitely a labor of love.”

As the owner of The Beez Kneez, a Minneapolis business that produces, sells and delivers honey (with year-round “beecyclists”), Allen and her team fully embody the honeybee’s work ethic. Their headquarters—nicknamed the Honey House—is humming with more than just the bottling of raw, unprocessed honey occurs.

“We sell retail here as well,” Allen tells TCB. “This is our third year in the space, so we’ll be stepping it up more as a place for beekeepers to come because we also rent out our equipment,” which include veils, suits, hive tools and containers for harvest.

But Beez Kneez isn’t just a retail endeavor – it also plays the role of educator. For the first time this year, new beekeepers—or those really interested in bees—were able to pay for an April through October beekeeping boot camp, aptly titled Camp Beez Kneez. Allen said the program sold out and that next year’s boot camp already has a waiting list.

With her Honey House crew, Allen also welcomes the spring season with an annual event, the Dandelion Honey Pastry Chef Challenge, which proves to be both a valuable revenue source and a creative way to advocate for bee welfare through a “Healthy Bees, Healthy Lives” campaign.

Playing both on the sales and education sides, Allen believes, better insures her business’ survival—especially with The Beez Kneez’ success being completely dependent on the weather. As she put it: “when you’re farming and you lose your whole crop, you’re in a heap of trouble. So pushing education and doing events that bring in income other than just the honey sales—that’s crucial.”

Enlisting her family and neighbors who tend to beehives also helps increase not just volume, but also the variety of honey that Beez Kneez can sell. “Production-wise, this year, is about a quarter to half from us,” Allen said. “The rest [is bought] from my aunt and uncle and other producers.” (Allen’s uncle, Ed Menefee, and aunt, Eileen Menefree, manage over 1,000 hives at Bar Bell Bee Ranch in Squaw Lake, and products like the dandelion and clover/alfalfa flavors are largely made possible through them).

With sales climbing, Beez Kneez has ramped up its own production. Many are looking for a less-processed honey—similar to a modern appreciation for organic, localized foods. “There’s a big market for it—a lot of people want it,” Allen said. “When I started, it went from a couple hives to 20 and then 50 hives and then 100.” Her number of tended hives continues to climb as local interest swells.

But all of that is threatened with a hardship on both bees and beekeepers.

“I’m curious to see what will happen in the coming years,” Allen said. “Honestly, I think beekeepers will go extinct before bees will because it becomes so economically hard.”

The reason, according to Allen: Beekeepers aren’t being well compensated for their harvest. “It’s a very precarious situation and people are still learning what honey costs and what they should pay for it. But with commercial beekeeping, a lot of the income comes from bringing your bees to pollinate almonds in California.”

With doubts about the future of California’s agriculture industry (due to its water consumption restraints), the jeopardized beekeeping trade could undergo numerous changes. One of the more unfortunate changes, Allen believes, is the drop in raw honeycomb production per hive.

Allen believes this reflects the transformation of Minnesota’s landscape and agriculture business. According to findings by the Pesticide Research Institute, honey production in Minnesota has dropped from its 1989 yield of about 21 million pounds to roughly 9 million in 2012. Honey production was a trade that often landed Minnesota within the top five highest producing states; however, that ranking has changed. Minnesota now falls behind Montana, North Dakota, South Dakota, Florida and California—most of which produce nearly twice as much honey as Minnesota—according to Statistica.

“Increasingly, Minnesota is becoming less and less friendly [to bees],” Allen said. “In fact, there are a couple of big beekeepers that moved to Texas and South Dakota simply because, in the springtime, you run the risk of getting hit with corn planting pesticide dust,” which researchers believe is a major killer of pollinators.

The Beez Kneez’ list of issues weigh heavily on Allen’s mind, but she asserts that she’s “just rolling with the punches.”

Allen is currently entering wintertime preparations for her business, where her employee roster drops from three to one. As the bees cluster in their hive to generate heat for winter survival, The Beez Kneez will spend the bulk of that time bottling honey and couriering it by bike.

Allen has also been increasing the Beez Kneez’ brand presence, as its products can be found in such locations in various coops like The Wedge and even The Bakken Museum. But it’s one of the company’s most unexpected and recent endeavors that Allen hopes will bring in additional business: the introduction of its Fleur de Beez Creole-Style Mustard.