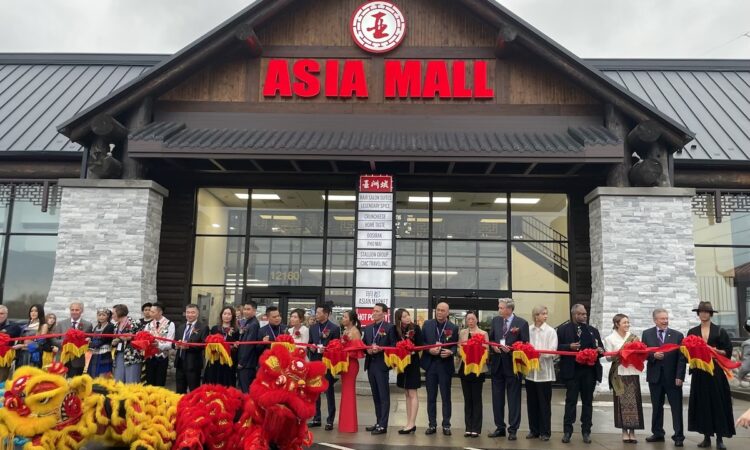 A first of its kind in Minnesota, the Asia Mall knits together a variety of Asian cultures. The mall's leaders say there's much more to come.
By Tina Nguyen
November 21, 2022

The long-awaited Asia Mall marked its soft opening with a celebration and ribbon-cutting ceremony in Eden Prairie earlier this month. Along with an Asian cultural fashion show and a traditional Vietnamese lion dance, the event featured a procession of speeches from many Minnesota dignitaries, including U.S. Rep. Dean Phillips and Eden Prairie mayor Ron Case.

The mall, which brings together a variety of different Asian cultures under one roof, is the first of its kind in Minnesota.

Case said he was excited to have the Asia Mall in his city. “The Asia Mall is a gathering place of Asian Americans across our region and state, but equally important, an opportunity for all of us to experience Asian culture and its influence on our ever-evolving American culture,” he said.

Jim Nash, a Republican lawmaker who represents Carver County in the Minnesota House, nodded to the building’s past identity as a Gander Mountain. Where he once spent thousands of dollars on fishing gear, he joked, he’d now spend thousands of dollars on goods from the Asia Mall. “I love seeing the unique footprint from different countries around the globe, who have come here to Minnesota to invest and to live their new dream, of business ownership and enriching the culture that is around them,” he said.

There appeared to be strong demand for the Asia Mall’s offerings. Customers quickly filled the mall’s parking lot on the soft opening on Nov. 10. The Asian Mart grocery store ended up selling over 100 durians over the first few days, forcing the store to limit one durian per customer, said Marshall Nguyen, the lead broker and adviser for the Asia Mall.

Walking around the mall, you might also notice there are still some empty spots–four retail spaces to be specific, Nguyen said. One space is already dedicated to a bakery concept, the other three are 500- to 600-square-foot spaces open for leasing. On the way are a hair salon and barbershop for stylists to rent chairs, a travel agency, a used car dealership office, and a showroom just for the mall’s robots.

The mall’s soft opening has been extended to at least the end of November, due to difficulties in fully staffing its vendors and grocery store. The Asian Mart, for instance, needs at least 40 full-time employees to have a smooth shopping experience, said Nguyen.

Those looking to attend the mall in its soft opening phase have to reserve a spot online and be mindful of limited occupancy and its limited hours of 12 p.m. to 7 p.m. As of right now, there’s no official date for its grand opening.

“We have a lot of American support, and that’s what it’s for– for people to see our culture,” Nguyen said. “We put everything on the line, and we know that we’re not going to make everyone happy. The goal is to do the best we can and serve the people that support us.”

Meanwhile, here’s a cheat sheet on what’s what at the Asia Mall. The mall includes several Dinkytown staples.

Asian Mart: Arguably the pièce de résistance of the Asia Mall is its Asian Mart grocery store which dominates most of the ground floor. While still on the prowl for cashiers and grocery clerks, the Asian Mart inventory looks promising with its aisles and freezers stocked full of classic Asian snacks, beverages, and ingredients. Asian Mart also has a seafood-dedicated section, with items like blue crab, scallops, and geoduck.

Pho Mai: Pho Mai debuted the second iteration of its Vietnamese cuisine restaurant at the Asia Mall. The restaurant is aiming for a more sophisticated spin on its more “hole-in-the-wall” Dinkytown location, reports Stephanie March with Mpls.St.Paul Magazine. Expect Vietnamese classics like phở alongside specialty dishes, like the popular beef and potatoes plate.

Mochi Dough & Bober Tea: Neighboring Pho Mai (since they have the same owners), this two-in-one vendor will mimic its Dinkytown location with a kiosk-style ordering system. Mochi Dough offers premium Japanese donuts with flavors like taro and black sesame. Bober Tea uses ingredients sourced directly from Japan to produce its loose-leaf teas and freshly prepared boba. Some of its most popular drinks include supreme mango green tea and chizu mango green tea.

HomeTaste Hong Kong Cuisine: If this Chinese restaurant seems familiar, it’s because its owners also own the popular Hong Kong Noodle in Stadium Village at the University of Minnesota. This restaurant offers Chinese classics like duck and pan-fried noodles. Many of its plates can also be made vegetarian with vegan options, as well.

CrunCheese Korean Hot Dog: After a positive reception at its Dinkytown opening last May, CrunCheese is bringing its Korean corndogs to the Asia Mall. The restaurant’s specialities include squid-ink hotdogs and a mozzarella and sausage dog.

Uni Uni Bubble Tea: This location will serve as Uni Uni’s third Minnesota location, following its existing locations at the University of Minnesota’s Stadium Village and Mall of America. This bubble tea vendor has a wide range of drinks. Customers can choose from its fresh fruit teas with an added cheese foam, plus flavored milk drinks, yogurt drinks with crystal boba, classic milk teas, Yakult (a Japanese sweetened probiotic milk beverage) drinks, and other special drinks, like the matcha latte with honey red bean. Customers can also order from its kiosk stations.

Legendary Spice: Legendary Spice, after holding a long tenure as a go-to Chinese restaurant on the University of Minnesota campus, is bringing its Sichuan-inspired menu to the mall. Like the name says, expect the dishes to test your spice endurance with plates like the spicy mao cai and traditional grilled fish.

Hot Pot City: Like many other traditional hot pot restaurants, Hot Pot City exhibits a do-it-yourself cooking style. Customers can choose a soup base– with options like Sichuan spicy and mushroom soup–and then meat and vegetable add-ons to cook in their pot. During select hours, Hot Pot City also offers an all-you-can-eat option. Additionally, kids under three years old can eat for free during these hours.