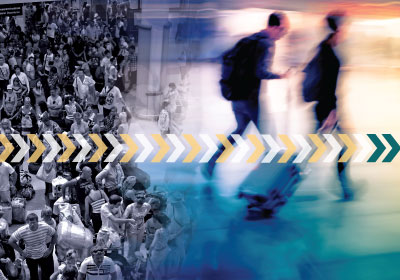 They're a hot growth business and business travelers in the Twin Cities are getting their first taste of the competition.
February 06, 2016

They are ubiquitous at airports: long lines of well-dressed men and women lined up against a wall, tethered to a plug socket, trying to conduct a business call in a gate area with too few seats. It’s a daily occurrence for many road warriors, and delivering them a respite has become a fast-growth business.

The niche is the common-use lounge. Many call them “clubs,” but there is no membership here. Pay a fee; escape the maelstrom. Some are out-and-out luxurious, with spa services, showers, chef-prepared meals, even private spaces for meetings or a snooze. Common in Europe and Asia, they are now the hottest item for domestic airports seeking to up their game. At MSP, the battle has been joined.

MSP was the right place at the right time. The biggest hurdle to opening an airport lounge, Andolino says, is availability of space. Few airports have enough open square footage in the right place, and rarely does raw space come available other than once a decade or so when airports renew their concessions programs. “We just went through a rebid of half of our concession program,” says Eric Johnson, director of commercial management and airline affairs at the Metropolitan Airports Commission. “We benchmarked 20 other airports. A common-use lounge was an obvious opening.”

For airports like MSP, which have focused recent energies on delivering a local shopping and dining experience, lounges are the next frontier. “No matter what you do with restaurants and shopping,” says Johnson, “there’s a growing subset of people looking for quiet.”

Once a private sanctuary little known to most travelers, airport clubs in the U.S. have traditionally been operated by airlines—typically the local hub carrier—on an annual fee-for-membership basis. In recent years, though, as airlines became more revenue-focused, clubs became less exclusive. Overcrowding became an issue.

Just five years ago, independent domestic airport clubs didn’t exist. But, say industry observers, overcrowding and the limited amenities at airline clubs led the market to fly toward something different.

MSP conducted an RFP. “We were looking to add amenities for passengers not flying Delta,” says Johnson. “Crowding in the gate areas has really created a need for additional options.” There was a sizable unused space on the mezzanine level at the throat of the E concourse, the one Terminal 1 concourse not used by Delta Air Lines.

The bidders were two U.S. newcomers, MAG USA and Airspace, a division of Zurich-based Swissport, which operates four lounges in U.S. airports. Competitor Dallas-based the Club did not bid, nor did American Express consider adding a Centurion Lounge for its premium cardholders. (“Amex was concerned about their partnership with Delta and didn’t want to compete with them,” says Johnson.)

MAG’s bid won out. It is a publicly owned UK corporation that operates five common-use lounges and four airports there, most notably Manchester Airport and London Stansted. Johnson says MAG has a 10-year lease and pays the MAC annual rent of nearly $300,000 plus about 7 percent of every admission. Andolino says the company spent $2 million to start up at MSP.

MSP is not without airport clubs. It is already home to two large Delta Sky Clubs, while United operates a tiny United Club near its gates in the E concourse. (MAG says it is hoping to work out an arrangement with the newly merged American Airlines to provide club space for travelers headed to its handful of E gates.)

The MAC saw an opening for Escape in part because of changes Delta made in 2014 to its Sky Club admission policies and pricing. For years, under Northwest and then Delta, MSP’s clubs were open to guests of members and guests of holders of Amex Reserve, Platinum and Centurion cards. Delta, facing club overcrowding nationwide, instituted $29 fees for most guests. Spokesman Anthony Black said the airline has recently invested tens of millions in hard and soft product upgrades for Sky Club and is working to manage membership levels to reduce crowding.

The MAC’s Johnson says he felt Delta’s pricing and admission policy changes had created a new need. (Sky Club memberships start at $450/year with single-visit passes sold at $59. Unlimited entry can be obtained more cheaply with AmEx’s Delta Reserve card.) For the day-use traveler, Delta used to sell passes “that could be used at multiple points on a connecting itinerary,” says veteran business travel advocate Joe Brancatelli. But no longer, so, he says, “there’s not a competitive advantage” to the Sky Clubs over common-use lounges for that customer.

Observers suggest the changes have been a mixed bag. Rene de Lambert blogs primarily about Delta at the frequent traveler site BoardingArea.com; he visited MSP’s Escape Lounge on its opening day. “Delta has stepped up, but Escape is a notch higher,” he says. “Plus the MSP Sky Clubs are often packed.”

The experience at other airports has been that even independent clubs, especially Amex Centurions, quickly become overcrowded at peak travel times. Escape’s UK clubs frequently reach capacity and close to walk-up visitors. “We don’t want to be overcrowded,” says Andolino. “We’ve got 131 seats [at MSP] and expect to handle about 170-plus travelers per day, but we will not admit anywhere near 131 people at once.”

Ultimately, though, Brancatelli thinks Escape is not really competition for the MSP Sky Clubs. “If you’ve paid for a Sky Club membership you’re likely to use it over anything else,” he says. “Partially for the geography, since an airline-aligned club is almost always closer to your flights.”

Because of that, Brancatelli says the common-use lounges are only a threat to the major carriers if they are able to lease enough square footage at space-constrained airports to deny the big three major carriers opportunities to expand or open new lounges.

Industry veterans say the airlines have historically run their clubs as profit centers. But that has become a murkier calculus since all the major carriers now offer free club access by carrying certain of their bank-issued credit cards.

Beyond airline clubs, the competitive lounge landscape is in its infancy. Domestic pay-as-you-go options are limited to Escape, Airspace, and The Club [see data box]. Pricing and amenities vary by company and location, but rarely are they competing in the same terminal. The only constant in the business is that more of each are on the way.

Lounge life: The inside story

The experience at MSP’s Escape Lounge feels premium compared with an airline club. The staff is solicitous, as in a restaurant. Food and beverage is unlimited and feels designed for palate appeal, rather than shelf stability. There is a concierge staff, printing, fast Wi Fi. The limitations are a lack of meeting rooms (the MAC wanted to protect its fee-for-use airport conference facility), spa services, or showers for travelers coming off redeye flights or a sweaty day of meetings.

Escape charges $45 for a three-hour visit, $40 if you book in advance online. It expects most of its guests to originate or end their trip at MSP. To seasoned road warriors who carry on their bags, have trusted traveler IDs, and can make it from entry door to gate in 20 minutes, such a niche may seem counterintuitive, but it isn’t, say experts.

“You know, I’ve been known to arrive at a club before a flight and office there for two to three hours, or stay at an airport for two hours after I get off my flight, conducting phone meetings,” says Egencia.com’s Chris Vukelich. “A club is the only place that works.”

At one time Amex’s upper-tier cardholders had access to American, Northwest, Continental, Delta, and US Airways clubs, but that atrophied to only Delta’s network. As a result, Amex created Centurion to serve cardholders without club options at non-Delta hubs. “Amex is using it as a branding opportunity,” says Vukelich. Centurion is currently the gold standard, say insiders—offering spa services, complete meal service, showers, etc. “You could spend your entire vacation in one,” says Johnson.

The other private lounges are meant to function as profit centers. “Airport lounges are a massive growth business,” says MAG USA’s executive vice president Beth Brewster. “The days of going into a beige room and having shrink-wrapped cheese and pretzels from a bin—that’s past.”

If MSP’s Escape can generate 170 visits per day at full retail price, it equates to $2.8 million in annual revenue for the company, though a substantial cut will go to ubiquitous airport concessionaire HMS Host, which handles Escape’s food service. If Escape meets its projection of 170 paid guests per day, the MAC will take in roughly half a million dollars annually in fees and rent.

Common-use clubs will never be able to match airline clubs in one key aspect: Airlines staff their clubs with empowered senior employees who assist members with everything from seat assignments to rebooking. “If you are delayed or there are irregular operations,” says de Lambert, “the private clubs can’t really help.”

Another fly in the ointment for MAG USA, say observers, is the lack of membership options. “Business travelers are not big fans of pay-as-you-go at airports,” says Brancatelli. He can’t see that business model working at MSP. Thus, “I think the lounge will do best with origin and destination leisure fliers and frequent fliers who aren’t Sky Club members.”

He believes it’s essential for MAG to affiliate its U.S. clubs with the global Priority Pass club membership network, as it does in the UK. “I think it’s a mistake for MAG to not be part of Priority Pass,” says Brancatelli. “It’s the coin of the realm for the heaviest club users.”

MAG’s UK airports mostly serve leisure travelers; accordingly, so do its clubs. The price-sensitive leisure travel market would not seem to be a fertile field for a luxe airport club, but Brewster says it’s a core component of MAG’s business: In the UK “we find they save on the ticket and splurge at the airport.” Which explains MAG’s next U.S. Escape Lounge, in Oakland, an airport dominated by discount airlines and cheap flights.

Even if Escape thrives, it’s not clear that leisure-dominated Terminal 2 (T2) will see a lounge anytime soon. “I’m not sure there are enough people at T2 throughout the day to feed a club,” says Johnson. “We’ve talked about it with Sun Country, but their operations are confined to very focused time periods during the day.”

Brewster says MAG is convinced that it’s a pretty simple calculus. “Anywhere with 4 million total passengers a year can work,” she says, with the caveat that “a lot of it is about footfalls. You have to have the right location.” (MSP T2 handled roughly 3 million passengers in 2015.) MAG USA hopes to operate five lounges by mid-2017 and reach 20 by 2020. It is currently bidding for space at Hartford and DFW airports, says Andolino.

For now, what’s playing out on the mezzanine level near the E gates is a grand experiment for both MSP and MAG: Whether the airport experience has become so overwhelming and chaotic that a critical mass of passengers will pay real money to make it smoother. tcbmag