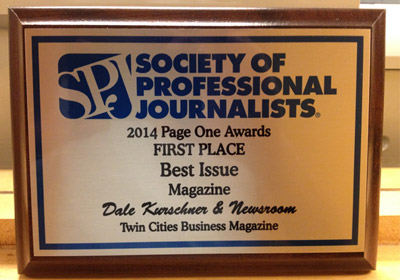 The magazine’s latest awards, given by the Society of Professional Journalists, recognize individual issues, stories, design, and more.
June 09, 2014

The annual Page One event honors the best in Minnesota journalism, and TCB received numerous awards within the magazine category, including first- and second-place prizes for “best issue.”

The first-place prize was given for TCB's April 2013 issue, which featured a cover story by Executive Editor Adam Platt about the dispute between Twin Cities & Western Railroad and public officials over the Southwest Corridor light-rail line.

The SPJ judges commented: “Creative use of photos and images, along with clear, crisp writing make this the winner. The magazine uses graphics to add to the storytelling. Infographics, in particular, make this contestant a standout. The ledes in these articles entice the reader to learn more. They are the best in this class.”

TCB took second place in the “best issue” category for its November 2013 issue, which featured a cover story by Senior Editor Adam Wahlberg that explored the topic of veterans in the workplace.

In addition, TCB Senior Writer Burl Gilyard was one of a trio of writers from Finance & Commerce, his former employer, who won an award in the “Spot News” category for coverage of downtown St. Paul real estate in the wake of Macy’s exit.

Thursday’s Page One Awards was emceed by Tom Weber of Minnesota Public Radio and included a keynote speech by John Harris—a Carleton College graduate who, after more than 20 years at the Washington Post, cofounded the political news powerhouse Politico.

The ceremony also included several special awards. Art Hughes and Joan Gilbertson were given the 2014 Peter S. Popovich Award, which recognizes journalists that exemplify the fight for First Amendment rights. Hughes, a freelance journalist, and Gilbertson, a WCCO producer, have been instrumental in the ongoing effort to bring cameras into Minnesota courtrooms, according to the MN SPJ. Star Tribune State Capitol reporter Jim Ragsdale, meanwhile, was named “Journalist of the Year.”

View the full list of Page One Awards winners here.

The Page One Awards represent TCB’s latest accolades. Earlier this year,the magazine won an award from the national Society of American Business Editors and Writers for “Best in Business–Magazine Commentary.” And last fall, TCB won nine awards from the Minnesota Magazine & Publishing Association’s Excellence Awards, recognizing everything from feature stories to cover design to its e-newsletter, Briefcase.