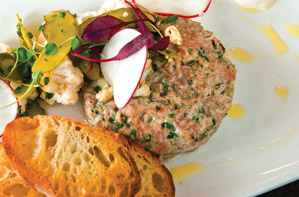 Tasting Menus Come to the ‘Hood

At Victory 44 and Travail, a bargain-priced tour of a chef's creative thinking.
By Tricia Cornell
January 17, 2011

Tasting menus, once a white-tablecloth experience, are moving to the polished wood bar tops and booths of casual restaurants. La Belle Vie, Cosmos, and Meritage all offer excellent tasting menus for $60 to $120. But two lower-ticket spots—Victory 44, which opened little more than a year ago in North Minneapolis, and Travail, which came to Robbinsdale last July—bring that experience to neighborhood dining.

Why put your choices in the hands of the chef? Victory 44’s Erick Harcey says not only is it fun—lots of varied tastes to share around the table—it allows the chef to shape a progression for you. He can move you from a tartly dressed plate of beets to a mellow root-vegetable soup, then a sweet pause with just a bite of deeply caramelized scallop before moving to an unexpected rabbit sausage. By the end, he says, you should find yourself thinking not that you had five great dishes, but that you had one great meal.

Harcey does a five-course tasting menu ($30) nightly and says, “We try to be more aggressive—more offal, more exotic plating. We use that as kind of a more experimental place to try out new dishes.”

At Travail Kitchen and Amusements, you might not order the celeriac soup on your own, but when it comes on the tasting menu with an unexpected—and absolutely perfect—smear of peanut butter, you might decide that it’s your new favorite. Travail’s 10-course tasting menu ($60) is meant for two: “It’s about value,” says co-owner James Winberg—10 courses might otherwise cost $80 to $100—“and it’s also about sharing a meal with somebody. Think of it as a hassle-free dining experience.”

Corner Office-Values Added
Innovation. Companies Want It. But What Is It? That’s Where Uri Neren Comes In.
What Business Thinks: TMI?
Tuning In
See all stories by this author >