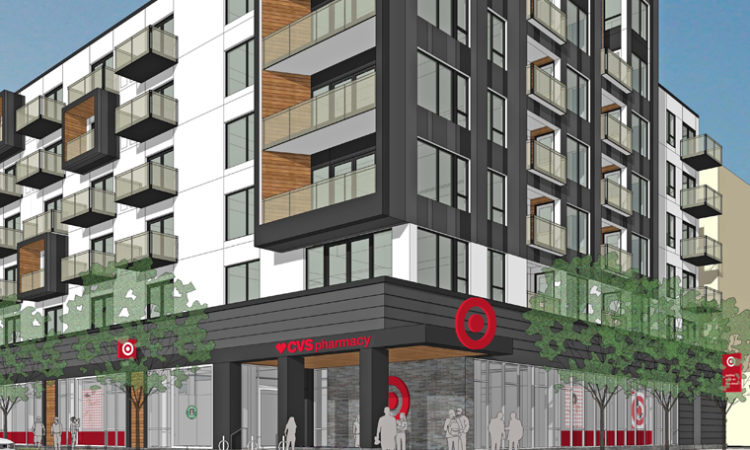 A rendering of Target's new Uptown location. (Image from Target)

Retailer has not closed a single store location in fiscal 2017.
By Burl Gilyard
October 16, 2017

Is there room for one more Target store in the Twin Cities? Minneapolis-based retailer Target Corp. believes so. It’s newest local store opens Wednesday, October 18, in the Uptown area of south Minneapolis. The 21,410-square-foot store is located on the ground level of the new Revel apartment building, which was developed by Minneapolis-based CPM Companies.

“Located in our hometown, we know that the Uptown neighborhood is a mix of young working professionals and families,” said Target spokeswoman Liz Hancock in a statement. “We currently operate 58 stores in the Twin Cities area, and know there is a compelling opportunity to reach additional guests living in the more urban neighborhoods – ones who may not have easy access to our current locations.”

Small-format, urban stores with less than 50,000 square feet of retail space are driving the retailer’s new store openings. Target now operates 56 small-format stores and plans to have more than 130 smaller locations by the end of 2019. The company’s first small-scale store opened in the Dinkytown area of Minneapolis near the University of Minnesota campus in the summer of 2014.

In an intensely challenging climate for retailers everywhere, with a spate of bankruptcy filings this year, Target has not closed a single store location so far for its 2017 fiscal year which began on January 29. With the additional stores opening this week, Target has added 26 new stores this year.

Twin Cities Business recently spoke with Target CEO Brian Cornell about the company’s plans to invest $7 billion to update stores over the next three years.

With many retailers battling sales declines in the face of online competition, Target drew some attention for its second quarter results. The company reported overall sales growth of 1.6 percent to $16.43 billion for the quarter. Comparable store sales – for stores open at least a year – for the period were up 1.3 percent. Digital sales climbed 32 percent.

The Uptown site has a history as a retail destination. For many years it was home to a Cheapo Records location. Prior to that Richfield-based electronics retailer Best Buy Co. Inc. operated a store on the site which closed in 1998.