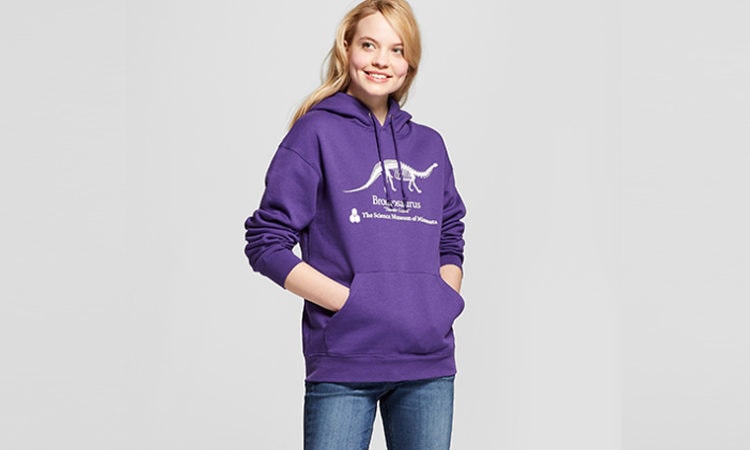 The exclusive hoodie will find its way to 1,400 Target stores in late February.
By Sam Schaust
February 20, 2018

Target has locked down a partnership deal with the Science Museum of Minnesota to sell the retro “Thunder Lizard” hoodie recently popularized by the television show “Stranger Things.”

The purple sweatshirt took the internet by storm late last year after the second season of the Netflix hit series premiered. In one episode, a curly-haired protagonist named Dustin sported the hoodie that featured a Brontosaurus skeleton design and the Science Museum of Minnesota logo.

To capitalize on the sweatshirt’s surprise demand, the local museum created an e-commerce shop to sell it and partnered with a printer out of Wisconsin to mass-produce the hoodies, according to the Star Tribune. Despite an abundance of copycat versions online, the Science Museum of Minnesota has sold roughly $1 million worth of the sweatshirts—nearly as much revenue it generates from its gift shop annually.

Although the craze isn’t what it once was, the Science Museum of Minnesota has agreed to let Target sell the sweatshirts in its stores. The museum, however, retained the right to sell the official hoodie exclusively online.

About 1,400 of Target’s 1,800 stories will have the “Thunder Lizard” sweatshirts in stock from sixes XS through XXL.

Kim Ramsden, a spokeswoman for the Science Museum of Minnesota, told the Star Tribune that both company’s hoodies would be identical aside from the inside tag. A percentage of Target’s sales will also be returned to the museum to fund its programs.

Target’s “Thunder Lizard” sweatshirt, which will hit stores later this month, is not the first licensing partnership deal it has made involving “Stranger Things.”

The Minneapolis-based retailer teamed with Netflix in October, just before the show’s second season release, on a variety of shirts, action figures, coffee mugs and a box set of the first season modeled after an old VCR tape.