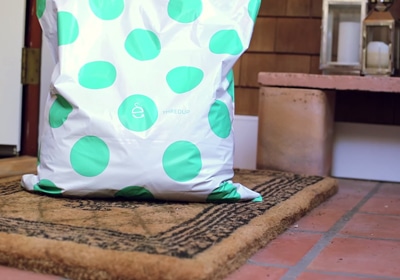 The retail giant is teaming up with ThredUp to exchange customers lightly used apparel for Target gift cards.
October 23, 2015

Less than a month after announcing it would deliver groceries to Twin Cities doorsteps, Target said it will now pick up your brand name and gently used clothing as well.

The Minneapolis-based retailer has partnered with secondhand clothing site ThredUp to offer Target gift cards in exchange for unwanted handbags, shoes and clothing.

Interested customers can order a “clean out kit” online and stuff it to capacity, so long as the items meet ThredUp’s quality standards. (The San Francisco-based service admits it “typically accepts less than 50 percent of the items” it receives.) The clean up kit can be returned in a variety of ways by: self-delivery to one of 11 participating Twin Cities Target locations, dropping the enclosed goods off at a nearby FedEx office, or leaving it for pick-up by a mail carrier at your doorstep. Target said the bill for shipping costs is on them.

The amount of money participants will receive varies. As it is stated on Target’s page on the ThredUp site, items listed by ThredUp as worth $60 or less will be paid upfront. For anything ThredUp values at $60 or greater, the original owner will receive compensation after the item has sold. That money is then sent to customers as an email gift card to be used at Target’s online hub or at any Target store.

Through partnerships with young startups like Instacart and ThredUp, Target has made strides to simplify life’s routines, particularly for those in the Twin Cities area, which is often a test market for the company.

Target’s team-up with ThreadUp comes only a month after the secondhand seller wrapped up an $81 million funding round led by Goldman Sachs. Forbes believes the company’s valuation to be roughly $400 million.

Target has not yet publicly announced whether its nearly 1,800 other locations will also get access to this latest partnership.