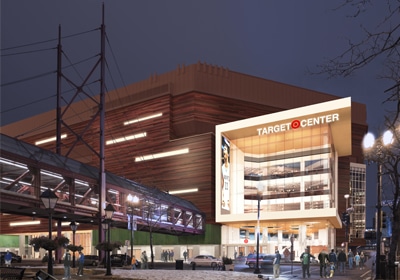 The Timberwolves and Lynx are seeking additional upgrades.
By Burl Gilyard
January 26, 2017

The cost of the Target Center renovation is increasing to $150 million, a notable increase from the current $128.9 million budget approved two years ago by the Minneapolis City Council.

According to a city staff report: “The Minnesota Timberwolves and Lynx would like to add scope to the project and are willing to increase their expense for project costs.” The increase for the Target Center overhaul is up for discussion at City Hall on Tuesday before the Community Development and Regulatory Services committee of the Minneapolis City Council.

The city’s report indicates that the team will “guarantee the payment” of costs covering seat replacement and a new skyway, estimated to cost $6.5 million.

According to the report: “The team will also finance and pay for all additional costs related to certain other scope changes and improvements they and/or the design group desire (e.g. video ribbon board, wi-fi, upgrades to certain finishes, team store, additional digital video signs in arena, locker room upgrades) that are currently estimated at $7 million.”

While project costs are climbing, the outlined plan calls for keeping the city’s contribution unchanged at $74 million.

But the city will look to tap other sources with plans to reinvest anticipated sales tax and energy efficiency rebates into the project. The report also notes that it expects the state to provide funding towards the proposed skyway that will improve access between the arena and the state-owned parking ramps.

At a price of $150 million, the price tag is essentially back to the number originally outlined six years ago ($155 million) in February 2011 when the team and the city unveiled the proposed renovation.

With an eye towards keeping a lid on costs, the city council approved a significantly pared back project budget of $97 million in November 2013. But by the spring of 2015, the city gave the green light to a revised budget of $128.9 million, citing increasing construction costs and that some project elements would cost more than originally estimated.

The new budget increase must ultimately be approved by the full city council, which next meets on January 27. The city of Minneapolis owns the arena, which opened in 1990. The ongoing renovation project began in 2016.

The original deal called for the city of Minneapolis to pay $74 million, the Timberwolves to cover $49 million and arena manager AEG to kick in $5.9 million.

City of Minneapolis offices were closed on Monday for the Martin Luther King Jr. Day holiday. A representative of the Minnesota Timberwolves and Lynx could not immediately be reached for comment.

Minnesota billionaire Glen Taylor owns the majority of the Timberwolves and Lynx. Last fall Taylor sat down with Twin Cities Business for an extensive interview focused on the business of basketball.