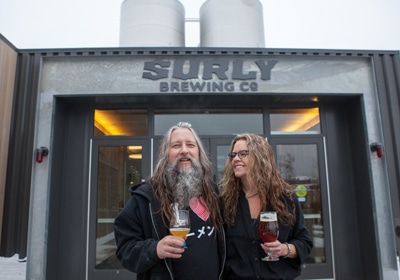 Haug helped found the brewery and spent a decade with the organization.
October 29, 2016

Todd Haug, one of the key figures behind Surly Brewing Company’s rise to the top ranks of Minnesota craft beer, announced Wednesday he would leave his post as head of brewing operations.

Haug has been with the Minneapolis-based craft brewery for 10 years and played a vital role in shaping Surly’s line of beers.

Earlier this year, Haug’s SurlyFest was voted the “Best Dark Lager” in the world, according to millions of consumer reviews on RateBeer.com. Esquire magazine also called the Surly CynicAle one of the “Best Canned Beers to Drink Now.”

“It never gets old to hear people tell you how much they enjoy your beer,” Haug said on Surly’s website. “[Surly president] Omar and I set out with the modest goal to build a brewery so we could create a different kind of craft beer—the kind we wanted to drink—and I think we achieved that.”

Omar Ansari, who founded Surly with Haug, said in prepared remarks, “Todd has been an incredibly influential part of Surly since the beginning and we instrumental in building the brewery from the ground-up, often with his own two hands: brewing, welding, making connections and forming collaborations to establish the irreverent brand it is today.”

Haug was a 25-year veteran of the craft brewing industry. Prior to Surly, he worked at Minneapolis-based Rock Bottom Brewery and St. Paul-based Summit Brewing.

Haug did not reveal what plans he had beyond Surly, but added that he felt Surly was being left in “extremely capable hands.”