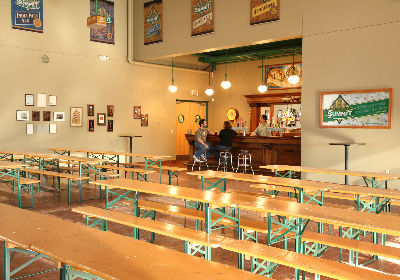 Summit Brewing Company, having reached brewing capacity, has sped up plans for its $6 million expansion; meanwhile, Duluth-based Fitger’s Brewhouse has reportedly scrapped its plans for a Minneapolis brewpub.
By TCB Staff
November 15, 2012

Summit Brewing Company has been planning a $6 million expansion that will double the brewing capacity of its St. Paul brewery.

But the company said Monday that it has hit capacity earlier than expected—and it’s moving up the project, originally slated for June 2013, to begin later this week.

Summit said that it now expects the expansion—which will add 7,632 square feet of cellar space and double annual production capacity to 240,000 barrels—to be completed by June 2013.

The brewery said that it has tapped a number of other Minnesota companies for the project: St. Cloud-based DCI will provide tank fabrication, Burnsville-based PCL Construction Services will be the general contractor, and Plymouth-based Van Sickle, Allen & Associates will provide engineering and architecture services.

Summit founder Mark Stutrud said in a statement that his company has been “quietly investing an annual average of $1.7 million into the brewery over the past 10 years,” but the upcoming addition represents “the most ambitious expansion since the new brewery was built in 1998.”

“The truth of the matter is that we’ve hit the wall on capacity,” Stutrud said. “We had to cut 12 brews this year due to capacity issues, so the original expansion date of June 2013 has been moved to this month.”

Summit will break ground on its expansion on Friday at a public event attended by St. Paul Mayor Chris Coleman and featuring live music, Stanley’s Northeast Bar Room’s food truck, and a special cask of the brewery’s new Old 152 beer. The groundbreaking event will take place during the open hours of Summit’s taproom—which launched in September—and the first 100 attendees to purchase a beer, beginning at 3 p.m., will receive a commemorative stein.

Summit was founded in 1986 and is considered a pioneer in the local craft beer movement. It is currently Minnesota’s second-largest brewery based on barrels produced in Minnesota. In 2011, Twin Cities Business named Stutrud one of “200 Minnesotans You Should Know.”

While the news of Summit’s earlier-than-expected expansion is likely to excite local beer fans, another recent development might disappoint them. The owners of Fitger’s Brewhouse in Duluth said in June that they planned to expand their business with a new brewpub in Minneapolis’ North Loop neighborhood.

Plans at the time involved purchasing the building at 107 Third Avenue North, which previously housed the Trocaderos nightclub.

But the co-owners have since shelved their Minneapolis plans, according to a report by The Journal.

Partners Rod Raymond and Tim Nelson in June signed a purchase agreement to buy the historic North Loop building, with plans to open a brewpub in the late fall or early winter of this year. But they never closed on the deal and chose instead to pursue other opportunities in Duluth, the local news outlet reported.

The Fitger’s owners have, however, been busy in Duluth: They opened Tycoon’s Alehouse and Eatery on New Year’s Eve last year, marking their fourth Duluth restaurant featuring Fitger’s beer. They are now constructing a larger brewery in an 18,000-square-foot, three-story building near Tycoon’s and recently spent $300,000 to purchase Endion Station, a historic train depot in Canal Park, according to The Journal.