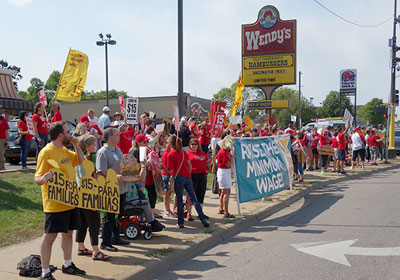 Yet some worry that the study underestimates the potential impact — especially on small businesses.
October 16, 2016

A study commissioned by a Minneapolis City Council once reluctant to go it alone in implementing a $15-an-hour minimum wage might now be used by council members to justify that very act.

When it was commissioned last fall, the study looked like a way to put off a controversial plank in an agenda designed to help lower-wage workers. At the time, Mayor Betsy Hodges — and an apparent majority of the city council — opposed Minneapolis having a higher wage floor than any other city or county in the state.

The council had already shelved a fair-scheduling ordinance that would have required employers to give advance notice of work shifts. And it was turning over the drafting of a paid sick leave law to a work group. Commissioning a study to look at the impacts of a city-only minimum wage increase pushed that issue off as well.

“If there were seven votes to create a minimum wage in Minneapolis only, we’d be doing it,” Council Member Lisa Goodman said last fall. “So I’m wondering, why spend $175,000 for a study? What is that, a political out?”

The results of the study, which eventually cost $147,000, likely won’t change anyone’s mind. It identifies clear benefits to an estimated 71,000 workers in the city who would get raises via a $15 minimum wage. And it sounded no sirens regarding the impacts on businesses that would pay it. As city director of Economic Policy and Development David Frank said this week: “Both sides will find material in this report which will prove their point.”

So if not the study results, what changed minds of council members to the point where there is now likely a majority of the 13 members in favor of a city wage ordinance?

It might be the intervening year in Minneapolis politics. After voting to block a November ballot proposition that would gradually raise wages in the city to $15, the council in early August ordered city staff to bring back an ordinance by spring. The vote was 9-2, with likely supporter Cam Gordon absent when the vote was taken. That’s not only a majority, but one large enough to override a mayoral veto.

A fuller picture of minimum-wage workers
The study, led by the Roy Wilkins Center for Human Relations and Social Justice at the University of Minnesota, looked at the economic impacts of both a $12 wage and a $15 wage. It also was to look first at a wage hike in Minneapolis alone and then at the impacts if wages were raised across Hennepin and Ramsey counties.

With plenty of caveats, the study suggests that low-paid workers would benefit — without significant harm to the employers that would be required to hike pay. “You don’t see an elimination of poverty, even though our findings do show that folks in poverty who are currently working would be disproportionately affected by this proposal,” David Cooper, an economic analyst with the Economic Policy Institute, which helped with the study, told the council Wednesday.

The study also presented a more-detailed picture of minimum-wage workers in Minneapolis. Half of the workers who would benefit are white, half are people of color. But since minorities make up a smaller segment of the overall workforce, the impact would be more widespread in communities of color.

A quarter of minimum wage workers in Minneapolis are students, while half of those who would be affected by a new wage work full-time. And majority of minimum-wage earners in the city are employed in three sectors: restaurants, retail and non-hospital health care, while single largest group is single and without children (which is also true of the overall workforce). Another 13 percent are married without children, 11 percent are single parents and 15 percent are married parents.

But the U of M researchers, applying methodology from previous studies, could not find a measurable impact a new minimum wage would have on employment. They did find that a $12-an-hour wage would increase business operating costs between 0.1 percent to 2 percent, while a $15-an-hour wage would bump such costs anywhere from 0.1 percent to 5.4 percent. But the researchers asserted that there are also financial benefits to businesses, including lower turnover costs and better productivity from workers who remain on the job.

“One difficult thing to interpret about this reduction in turnover rate is that there is a cost savings associated with this. However, it does not get realized in the normal balance sheet … whereas an increase in the minimum wage would,” said Thomas Durfee, a U of M PhD student who was part of the study team.

Restaurants would be the most-affected businesses, likely being at the top end of the possible range of cost increases. But the study claims that more than half of the increased costs could be passed on via higher prices; it calculated that a $25 meal would be increased by $1.66 once a $15 wage kicked in.

A disconnect with small business owners?
Goodman said she thinks the study underestimates the impact on businesses, especially restaurants, where an increase in costs of 5 percent might be the difference between survival and failure.

“I was really hoping we would get a study back that shows us what the cost/benefit was, how it would affect businesses,” Goodman said Wednesday at the city council’s committee of the whole meeting. “But when I see a report that basically says ‘There’s no negatives to businesses at all,’ it’s hard for me to consider a report completely unbiased.” She then asked the members of the research team who have expressed opinions in favor of raising minimum wages to raise their hands. Two did.

Council Member Linea Palmisano, who said she would prefers a countywide wage, asked whether the study identifies how a higher minimum wage in Minneapolis would impact a business that competes with businesses outside the city.

The researchers concluded that it wasn’t possible to determine whether businesses inside the city would relocate because of the higher minimum wage, noting that it is impossible to “fully untangle the city’s economy from the broader regional economy.”

Tip credits allow an restaurant owner to pay a lower hourly wage and use tips to guarantee that a server makes at least the minimum wage paid to non-tipped workers. Minnesota’s minimum wage law does not provide for a tip credit, so a restaurant server must be paid the minimum wage in addition to whatever tips are collected during a shift.

Seattle, Frey noted, has a tip credit in its local ordinance even though Washington state’s minimum wage law does not have one. After the meeting, Frey said he has no proposal regarding tip credits and is only asking questions for now.

Ginger Jentzen, the campaign director for the $15 Now effort, which collected signatures seeking to put the issue on the November ballot, said the report validates much of what she and other members of the coalition have been saying about low-income workers.

“This report shows that passing a $15 minimum wage by 2021 will be a tremendous step to reducing poverty in Minneapolis, and would especially provide economic opportunity for women and workers of color,” she said. “The study counters the big-business scaremongering about unemployment, price increases and business closures.”

Matthew Perry, president of the Southwest Business Association, isn’t conceding that there is majority support on the council for a minimum wage ordinance. “There seems to be a disconnect from what our small local business owners are saying to us and what was presented today in terms of impact to the cost of doing business and employment strategies,” he said.

“As with fair scheduling, we’re encouraging our members to have conversations with their council member,” Perry continued. “Council members are very sensitive to how business owners in their ward are feeling, how their businesses are doing.

The city staff will now begin implementing an “engagement plan” that includes listening sessions and meeting with business, labor and community groups. It expects to draft recommendations during early spring and present them to the city council next May.