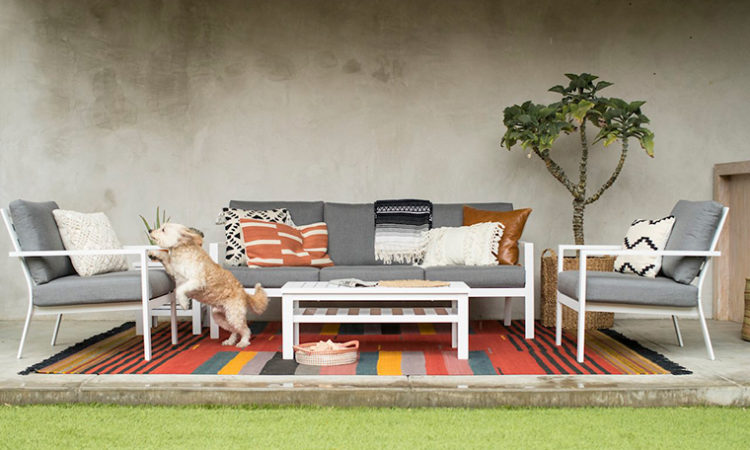 As people look toward summer, outdoor enhancements are hot sellers.
By Kait Ecker
May 19, 2020

While aspects of summer may be cancelled, kids and parents alike still need to get outside, and sales show people are making a commitment to their outdoor spaces this year.

Trampolines, outdoor kitchens, playgrounds, decks, and lawn furniture are all seeing an increase in demand from consumers. And it’s no wonder with many public playgrounds closed, sit-down service in restaurants closed, and family vacations canceled.

As soon as schools were closed, Rainbow Play Systems, founded in Minnesota and now based in South Dakota, saw a dramatic increase in business, said Tom Giles, owner of Rainbow stores in Bloomington, St. Cloud, and Sioux Falls, and Midwest regional manager.

“All of our products are through the roof compared to their normal sales,” he said.

March through June are typically peak months, but over the last six to eight weeks the Midwest region has seen a 200 percent increase in sales compared to last year, he said.

“We saw a spike that we haven’t seen before,” Giles said. “Every time they would extend the stay-at-home order, I think it would drive people to find something to do at home as they slowly realized that this is going to be more than just a week or a month or two months.”

With some neighborhood parks closed, people who wouldn’t ordinarily purchase a playground are putting them in.

“I can recall customers coming in and first thing out of their mouth is ‘We’ve got a beautiful park down the road, but we can’t use it,’” Giles said.

Even though sales will drop off once summer and fall hits, he thinks sales will be higher than average at year end, and for 2021 compared to 2019.

“I think that the ripple effect of this will continue on for a few years,” he said.

Supply hasn’t been an issue for the playsets or basketball hoops since the manufacturing facilities in South Dakota and Iowa have been operating as normal. (Neither state has issued a stay-at-home order.) But trampoline supply has been an issue due to a gap in production and an increase in demand.

“They ran into an issue where they were locked out of the factories basically because of the pandemic, so they lost a month of production. On top of that, their demand more than quadrupled,” Giles said. “They got dealt a tough hand. But they’re gonna bounce back.”

“Anyone that’s doing any sort of home activities or home improvements … is going to see a long-term benefit from this,” he said.

“Decks and outdoor living spaces have definitely picked up. They always pick up in the spring, but not like it has in the last weeks,” he said. “With the lack of being able to eat out, people are inquiring more about outdoor kitchens.”

His decking salespeople are booked solid, and people keep calling about the outdoor kitchens.

“We had anticipated an increase in decking, but not in outdoor kitchens,” Lindus said. “Of all the projects we get to participate in, outdoor kitchens are just fun for everyone.”

Sales of gutters⁠—a smaller ticket item—are also through the roof, which he said is surprising as this spring hasn’t been particularly rainy.

As people finish decks, landscape projects, and gardens, they’re looking for furniture to complete their outdoor haven. For the last month, outdoor furniture seller Yardbird has experienced a huge influx in demand, according to co-founder Jay Dillon.

“From what we forecasted we’re seeing about three times our normal sales,” he said.

For two weeks in a row, Yardbird logged $1 million in sales, and was on track for the same last week. While this is its peak season, the Minnesota-based direct-to-consumer company would normally be doing about $350,000 a week in sales.

Dillon cites the increase in demand to the pandemic and people investing in things they can actually do.

The jump in demand wasn’t something that Yardbird was anticipating, but Dillon hopes it continues as the weather continues to be nice.

“We started doing our own manufacturing this year on our Adirondacks and things like that, so we’ve been able to speed up a lot of that in production to meet the demand,” he said.