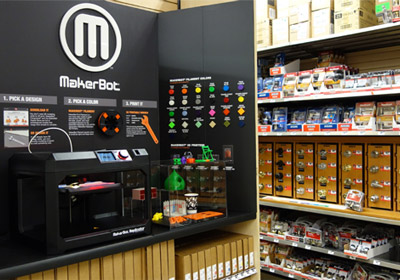 Stratasys 3D Printers To Pop Up In More Stores

The company has been pushing printers into stores and other consumer-friendly locations.
December 05, 2014

It will be a little easier to purchase 3D printing equipment in the Twin Cities during the holidays thanks to recent deals between Stratasys Inc. and three big retailers.

The Eden Prairie company announced this past week that its MakerBot subsidiary—which is based in Brooklyn, New York—is expanding its pilot project with Home Depot and rolling out sales in a number of Staples stores. Additionally, Stratasys’ professional-grade 3D printer will be available at Amazon.com.

The Home Depot stores in Plymouth and Eden Prairie are among those that will begin selling the printers. None of the local Staples locations are part of the deal.

“We are really excited to expand MakerBot’s presence in physical stores,” MakerBot acting CEO Jenny Lawton said in a statement. “It’s a very cool thing to walk into a store, see and experience [the product], then be able to purchase and take a MakerBot home with you.”

The company said stores will showcase the products with live demonstrations and trained staffers who can guide purchase decisions. The lowest-price models start at nearly $1400. Sales of Stratasys’ professional-grade printer will sell online for $5,999.

Stratasys has been pushing pilot programs in consumer-friendly locations recently. It followed up its July test in Home Depot stores with a program in 100 UPS stores in September.

The company beat analysts’ earnings expectations for the third quarter ending Sept. 30, according to Zacks Investment Research, but lowered its outlook for the year due to acquisitions costs.

Twin Cities Business did a June cover story on Stratasys that took an in-depth look at the company and the industry as a whole. Some see 3D printing as an application that can open greater potential and usher in the next industrial revolution.