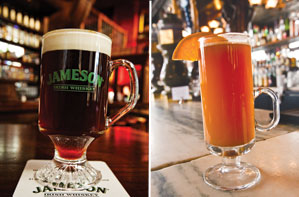 There are few clear advantages to living in a place where winter begins on October 10th. But here’s one: Like pub owners on the damp English moors and Celtic bluffs, some in the Twin Cities mix up spectacular hot drinks.

At W. A. Frost, wassail appears on the menu around the autumn equinox and remains until the Ides of March. Originally a heavily spiced mead or wine, it was the drink of warriors in the epic poem Beowulf. Medieval British farmers made it with ale and used it in rituals meant to enhance the fertility of animals and crops.

At Frost, “we combine apple cider with pie spices like cinnamon and clove, and bring it to a boil,” says Executive Chef Wyatt Evans. “Then we add the alcohol: triple sec, brandy, and rum.” The result might not make you more fierce or more fertile, but it is fiery and comforting.

If you’re on the Minneapolis side of the river, however, and suddenly overcome by wind and ice, stop for an Irish coffee at the Local. Seriously, bartenders from Belfast should fly in to go to school on this drink.

For three years running, the Local has sold more Jameson Irish Whiskey than any other bar in the world. Jameson is the basis for the Irish coffee, but like Frost’s wassail, this cup contains a couple of additional jiggers.

“We use a homemade Guinness syrup instead of table sugar,” says Manager Kevin Naughton. “And the topping is part heavy whipping cream, part Bailey’s, so that’s the first thing that touches your palate, Irish cream.”

It all makes for a drink that’s smooth, boozy, dark, chocolaty—and blessedly hot. Fierce enough for doing battle with the holiday rush.