Besides a stereo system with iPod input, purse hooks, storage compartments, and in-floor coolers, the City Cycle has customizable ad space on the front, rear, and canopy.
August 01, 2011 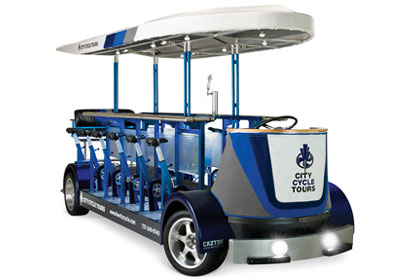 St. Paul-based Caztek Engineering takes on projects ranging from rocket engine parts to medical devices, but it spun into new territory recently. The assignment: Improve on the standard pedal-powered pub, the kind of kegger on wheels that you might have seen cruising streets in the Twin Cities, Milwaukee, or Chicago. Most are manufactured in the Netherlands.

Caztek’s model, the City Cycle, rolled out this summer, and Caztek President Casimir Sienkiewicz says a coil-spring suspension—for smoother riding and imbibing—is one of the biggest improvements his engineers made.

“We’ve always been huge car guys,” Sienkiewicz says. While the City Cycle “doesn’t have a rippin’ V8,” it has automotive parts—a rear axle designed for Ford cars, hydraulic brakes by General Motors. “The chassis design is capable of going 100 miles per hour, even though it will never go more than six,” Sienkiewicz says.

Caztek built it for Florida-based City Cycle Tours, LLC (thecitycycle.com), which rents out the 15-seat mega-bike for bachelor parties, corporate team building, and other events. City Cycle Tours (which provides a sober driver) launched in the Twin Cities this year and is exploring other markets.