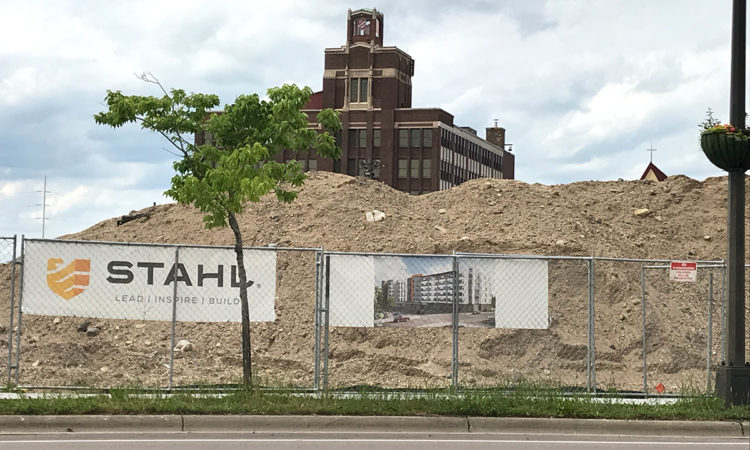 Construction is now set to restart on the project on July 6. Burl Gilylard

The Cambria/Fairfield development has been idle for two months.
By Burl Gilyard
July 01, 2020

Bloomington-based JR Hospitality and Iowa-based Hawkeye Hotels broke ground on a new, double-branded hotel project in downtown Minneapolis in March. The project will have two hotel flags, Cambria and Fairfield Inn & Suites, with a combined 215 rooms. But construction stopped not long after the groundbreaking. The site has been idle since the last week of April.

Minneapolis-based Stahl Construction is the general contractor for the project.

“At Stahl we work closely with owners through these slow times while they kind of assess the current market conditions,” said Lisa Thiel, director of marketing and corporate development for Stahl Construction. “In this case the project was temporarily placed on hold by the owners, but it will be starting up again.”

Thiel said that construction is now set to restart on the project on July 6.

City of Minneapolis staff at the Community Planning and Economic Development (CPED) department seemed unaware that work had come to a halt on the project.

In a response to an inquiry from Twin Cities Business, city spokeswoman Sarah McKenzie said last week, “CPED – Development Services issued (revised) building permits some time ago, before Covid-19 shelter in place order. No other updates at this time.”

Plans for the new hotel concept on the site first surfaced in early 2018. The project includes two property parcels: 1000 Hawthorne Avenue and 1024 Hawthorne Avenue. The land is often referred to as the “Ramada site,” in reference to a previous hotel that once stood on the property.

Developers had been trying for more than a decade to build something on the site. Developer Bob Lux, principal with Minneapolis-based Alatus LLC, was part of a group of investors that acquired the Ramada hotel in 2005 and then tore it down.

A 2017 MinnPost article dubbed the Ramada site to be one of the “six most prominent pieces of underused real estate in the Twin Cities.”