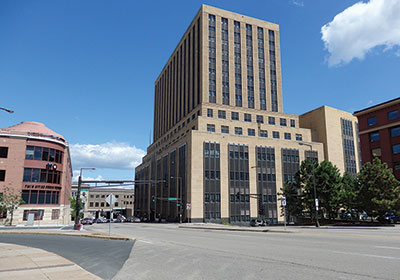 Grand public buildings have seen adaptive reuse all over the Twin Cities, but one of the more audacious is happening with little publicity in St. Paul. Developer Jim Stolpestad of Exeter Group is remaking the former U.S. Post Office and Custom House tower on Kellogg Boulevard. The 17-story masonry structure overlooks the Mississippi and is being transformed into a complex that will include condos, apartments, restaurants, parking and self-storage. It will retain the name Custom House.

Stolpestad bought the building last summer for $5.25 million. He told the Pioneer Press it would take $50 million or more to renovate the building, and was counting on public dollars—in environmental cleanup grants, and state and federal historic tax credits—to help foot the bill.

Stolpestad confirmed in April that hazardous material removal in the building had begun but declined any other comment, leading to some speculation that the plans are under reconsideration. Pete Dufour, brokerage vice president at Colliers International, doesn’t think so.

“I’m sure Jim’s done his homework, and I know that other projects in Lowertown have done really well, like the Penfield, the Pioneer Endicott project, and the Farmers Market Flats,” he says. “I can’t imagine it won’t succeed.”

St. Paul officials also say the project is on track.

“The Exeter folks were just in here getting their preliminary site plan reviewed by our Department of Safety and Inspection, so things are rolling along,” says Diane Nordquist, a housing project manager for the city. The project has received an $850,000 grant from the Met Council for contamination cleanup and $725,000 in redevelopment money from the state Department of Employment and Economic Development, and anticipation at City Hall is high. “This is an important structure for the city,” says Nordquist, “and we’re thrilled that it was purchased and is going to be redeveloped.”