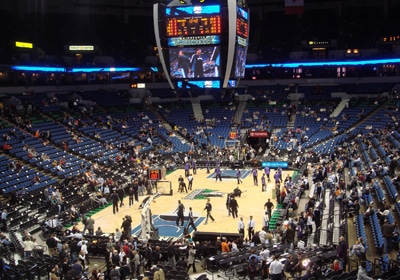 Sportradar has inked an extensive deal with the National Basketball Association, which locks it in as the official provider of basketball-related statistics for the NBA, WNBA and the NBA Development League.

The partnership, announced Thursday, will allow the sports data company—which holds its U.S. headquarters in Minneapolis—to sell proprietary statistics from basketball games to a variety of companies, ranging from Coca-Cola to ESPN. Although Sportradar and the NBA have not disclosed the cost of the deal, Bloomberg news agency recently reported it was worth $250 million according to “people familiar with the negotiations.”

Sportradar will start by distributing NBA data and audio-visual game feeds to gaming operators outside of the U.S. during the 2016-2017 season. At the same time, the company will be monitoring worldwide betting activity surrounding the games. Sportradar’s Integrity Services, which detect and deter fraudulent gambling practices, have become a major selling point to professional sports leagues.

Just last month, the National Hockey League signed Sportradar as its gambling watchdog. Furthermore, in October 2015, Ted Leonsis (owner of the Washington Wizards NBA franchise), Mark Cuban (owner of the Dallas Mavericks) and Michael Jordan (owner of the Charlotte Hornets) invested $44 million in Sportradar and were named members of its U.S. advisory board.

“Perhaps the sexiest thing, because it is one of the most important things right now, is how big data and algorithms can protect against fraud,” Leonsis told Forbes a year ago. He went on to note Sportradar’s capabilities to prevent fraud as a reason behind the group’s investment.

The second phase of Sportradar’s deal with the NBA will take place during the 2017-2018 season. Starting that year, Sportradar will be taking advantage of a “state-of-the-art” player-tracking system to gather advanced statistics. Also known as next-generation data, those advanced statistics will include data such as player speed, the distance and height of a jump, paint touches and defensive impact.

“The multi-faceted partnership with the NBA presents a really exciting opportunity for Sportradar and for fans of NBA basketball worldwide,” said Carsten Koerl, CEO of Switzerland-based Sportradar, in a statement. “We will be developing a full suite of products, tools and services that will bring the full depth of this exhilarating league’s data around the globe.”

Sportradar’s deal with the NBA will run until the end of the 2022-2023 season, in which the NBA can choose to renew its contract with the company.

Previously, Chicago-based Stats LLC owned the exclusive deal with the basketball organization. Stats also owned deals with many of the America’s largest sports leagues, however, a number of those have switched to Sportradar as its data service provider.