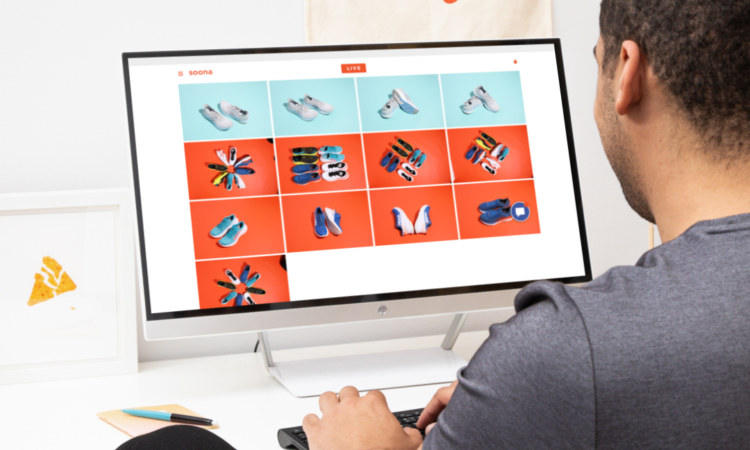 The Minneapolis-based company has plans to scale its virtual content creation platform for e-commerce brands and open a local fulfillment studio.
By Tess Allen
April 16, 2021

Fueled by surging demand for product photos along with the growth of e-commerce during the pandemic, Minneapolis-based photo and video studio soona just closed on a $10.2 million Series A funding round that will help the startup scale its technology, open a distribution center, and hire as many as 60 employees this year.

With studios in Minneapolis; Denver, Colorado; and Austin, Texas, soona plans to use its newest funding to expand its proprietary camera-to-cloud technology, introduce a new membership option, and open its first digital fulfillment studio in Minneapolis.

When soona opened in Minneapolis in 2019, physical studio space was essential to the business model. Customers would bring their products in for a shoot, but unlike traditional commercial studios, soona would deliver content within 24 hours. But the pandemic made soona rethink its model.

When Covid-19 temporarily shut down soona’s studios last year, the company focused on augmenting its technology in order to make its services virtual. Now, soona’s customers can mail soona their products and participate in virtual photoshoots, allowing them to make real-time decisions and requests from anywhere in the world as if they were on set. It also allows soona’s photographers to work from anywhere in the world too.

The virtual shoots were so successful that they’ve become the startup’s primary focus. In 2020, even with a global pandemic, soona more than tripled its number of customers to 4,000, and tripled its number of employees to 53. Seventy percent of its month-over-month bookings were made by repeat customers. Revenue shot up 400 percent. Co-founder and CEO Liz Giorgi projects similar growth this year.

Digital Commerce 360 reported that consumers spent over $860 billion online in 2020, up nearly 45 percent year over year. The rush to get products online created demand for soona.

This summer, soona will launch its first membership option, allowing companies to purchase a single company-wide membership for use across all its departments. Giorgi expects the opportunity to appeal particularly to larger brands in need of new, diverse content on a regular basis.

To support the growth, soona plans to open a large digital fulfillment studio in Minneapolis. “Currently, we are intaking hundreds of customer packages every single day, distributing them to our locations, and supporting their shoots. But now, we really see a future with this warehouse infrastructure where we’re going to be able to support up to 50 shoots concurrently just inside our warehouse.”

Soona customers will also be able to store products at the warehouse for on-the-fly shoots. So a candle company, for example, could simply call and request new images of its candles on the soona shelves. The fulfillment studio is expected to be up and running in September, creating 60 new jobs, Giorgi said.

Soona’s previous rounds of fundraising included the company’s own “candor clause,” which required investors to disclose if they’d ever been accused of any sexually inappropriate behavior. The clause, drafted by Giorgi and Anderson after a series of uncomfortable dealings with male investors, aimed to promote gender equity in venture capital.

Prior to this recent Series A round of financing, soona worked with Union Square Ventures to expand the terms of the clause. Now, it requires investors to disclose if they’ve ever been accused of any harassment or discrimination related to race, color, ethnicity, national origin, religion, disability, sex, gender, gender expression, sexual orientation, or gender identity (including transgender, non-binary, or gender-fluid identifies).

“We want it to support even more founders who are underestimated in the market at large,”Giorgi said, “This really broadens the clause to a lot of folks who maybe are not being treated as well by venture capital and gives them protections. Union Square Ventures was really a great partner in this.”