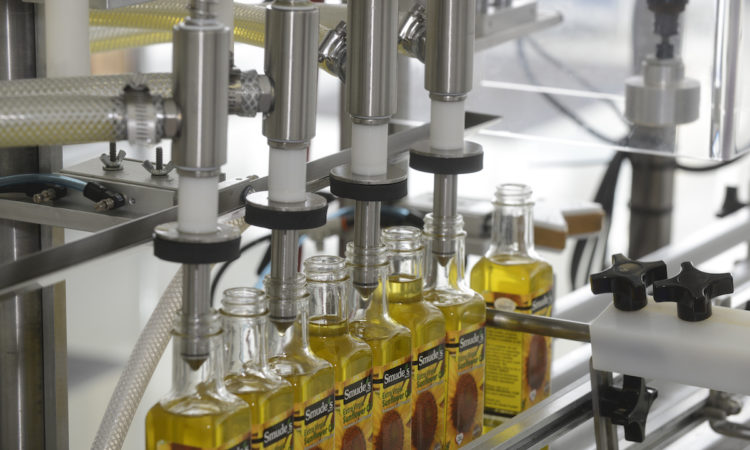 If farming entrepreneur Tom Smude seems to be doing 20 things at once these days, consider that four months ago, he wondered if he’d be doing anything at all.

When Covid-19 and the attendant shutdown hit, “I was pretty nervous there for a while,” Smude recalls. “No one moved. No one called until the end of June.”

Now Smude’s getting plenty of calls. As founder and co-owner of Smude’s Sunflower Oil in Pierz, a town of 1,400 about 30 miles north of St. Cloud, he’s now supplying his high-grade, non-GMO sunflower oil (offered in a variety of infused flavors) at all 81 Cub Foods stores and most of Hy-Vee’s Minnesota supermarkets. And his company’s microwave popcorn, which uses his sunflower oil’s butter-like flavor, is currently available at Byerly’s, Lunds, Kowalski’s, Coborns, food co-ops, and on Amazon.com. Smude credits most of that interest from supermarket companies to the advertising he ran on the University of Minnesota Golden Gophers football broadcasts last year.

Smude’s Sunflower Oil announced its partnership with Cub and Hy-Vee in late May. Until then, things for Smude’s agricultural businesses had been looking a bit grim this spring. But Smude learned to pivot long before this pandemic: his sunflower oil and popcorn business are the result of diversifying when ag sales hit a downturn a decade ago. (Smude Enterprises received TCB‘s Manufacturing Excellence Award in 2019.)

In addition to his sunflower oil business, Smude raises cattle, and for years has produced beef for the retail market. In February, the price of beef was $1.26 per pound. When Covid-19 hit, it dropped to 85 cents—and suddenly Smude was staring into the abyss of a $60,000 loss.

Then one spring morning, he saw a television news story about a meat shortage. He told his wife, Jenni, that he planned to buy 125 additional head of cattle. “She looked at me like, ‘You’re crazy,’” he recalls.

Undeterred by his wife’s sensible skepticism, Smude put an ad for his beef on a Facebook site called Farm Direct, a direct-to-consumer marketplace for farmers. “I sold 10 head within a day,” he says. “The next day, I sold another five.” So far, he’s sold 90 out of that 125, and he believes he’ll sell the rest soon, nearly all via direct-to-consumer in halves and quarters. “The beef sales are crazy,” he says. “I would never have expected that, ever.” That said, he does expect it to continue as more and more consumers buy their food directly from the people who grow and raise it.

And if running those two businesses isn’t enough to keep him busy: Smude also owns and operates Midwest Sales and Construction, which sells grain bins and other agricultural equipment. In December, he bought Rich Prairie Custom Woods, a business located next door to his oil and popcorn facility. Rich Prairie produces a variety of custom-made wood components for customers.

Smude also has been ramping up a co-packing operation. In early July, he installed a new machine that allows the company to produce 1,350 bags of popcorn an hour, compared to the 175 it had been able to make before. That leaves employees with extra time on their hands. To help fill their hours, Smude has been co-packing food products for other companies. Examples include hemp oil, wild rice, and meatball mix for St. Paul-based 3 Lonetti Sisters.

Meanwhile, Smude is also testing new varieties of sunflowers for seed companies. He buys most of his sunflowers from farmers in Minnesota and the Dakotas.

Smude says that business finally began to loosen up in June, and intensified the first week of July. “It’s been crazy for seven weeks now,” he says. After last spring, crazy is good.