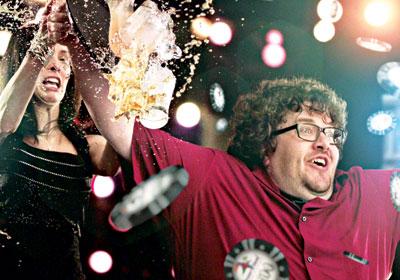 Lake Wobegon? Hardly. More like Las Vegas, at least for the gamblers who make Minnesota one of the country’s casino capitols. The challenge is to differentiate between different casinos. For Treasure Island Resort and Casino, that meant a TV campaign that made an immediate impact on viewers.

The visually arresting :30 spots go fast, but seem slow, as a “phantom camera” shoots at high speeds, which, when slowed down, allows the action to be shown in super-slow motion, according to Periscope’s Stephanie Lensing. Periscope is the Minneapolis agency that has created campaigns for Treasure Island for a decade-plus. “It’s more than just gaming,” Lensing said. “It’s what can go down on any given night.”

Portraying the ‘any given night’ guys and gals are everyday men and women, the kind you might see in a casino, or a grocery store, for that matter. But a win has jacked up the patrons, who spill drinks, laugh, dance, and become amusingly unhinged in near-stop action photography. The slow shots are juxtaposed against fast music, and the only text shown is at the end: Best Night Ever.

It looks like 2011 was the best year ever for Periscope, which last year grew billings $20 million to a total of $300 million. This meant 83 new hires and new office space across from its Washington Avenue HQ to accommodate its 330 employees.

Some growth came from new clients like Great Clips and a division of Cargill, while some came from existing clients like Treasure Island, which invests about $5 million annually, according to Lensing. About 60 percent is spent on spots for the three TV markets—Rochester, LaCrosse, and the Twin Cities—within 100 miles of the Red Wing casino. The other 40 percent is split between print and online efforts.