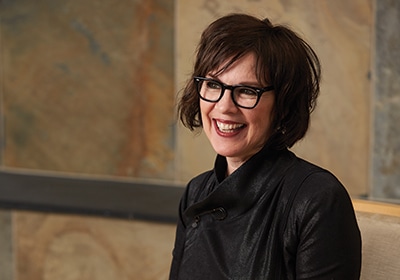 Select Comfort’s big bet on technology is paying off, so why isn’t Wall Street convinced yet?
By Fran Howard
March 05, 2016

Even after a less than stellar night’s sleep, Shelly Ibach is high-energy. With an average SleepIQ score of 82 (100 is considered perfect slumber), the CEO of Select Comfort, maker of Sleep Number beds, typically plays it smart when it comes to getting enough rest. But not always. “I was so tired this morning,” Ibach said in January. “Last night my SleepIQ was only 68 because I stayed up late to watch the Vikings beat the Packers.”

Ibach should be sleeping soundly every night, given how emphatically she’s improved Select Comfort’s results since becoming CEO four years ago. As it ceased to be the only seller of adjustable air chamber mattress technology, the company moved into the realm of a different proprietary technology—information. Once infomercial-driven, Select Comfort has evolved into a savvy brick-and-mortar retailer with the bed industry’s most innovative technology.

Yet Select Comfort (NASDQ: SCSS) remains a diverse entity, owning every step of the process, from procuring raw materials to shopping mall leases, exposing its operations to a variety of complex headwinds.

Sales for the first nine months of its most recent fiscal year beginning Jan. 1, 2015, were nearly $1 billion—a 20 percent increase from year earlier results. Operating income was up 43 percent to $106 million during those same nine months. And sales at stores open at least one year increased 16 percent compared with year-earlier levels.

Select Comfort also has an enviable balance sheet. It has no debt and nearly $115 million in cash and marketable debt securities, generated $45 million in operating income in the third quarter, and recently obtained a new revolving credit loan that can be tapped for up to $100 million (five times the amount of its previous revolving credit facility).

About that stock price…

Still, heading into 2016, the company’s stock was trading around $21 per share, roughly the same as when Ibach took over. This could be, in part, because Select Comfort is difficult to compare with peer-group businesses. It started out as a furniture maker, and its vertical integration makes it unique within this niche. Not only does SCSS innovate and design its own products, it also manufactures its beds and sells them through its 490 corporate-owned stores throughout the United States.

Its stock surged last year to more than $34 after Blue Clay Capital Management, a Minneapolis-based hedge fund, bought more than 1 million shares and launched a proxy solicitation to force the company to increase its store count from 463 locations to 900.

Select Comfort successfully defended against that move, insisting such aggressive growth would cannibalize sales at existing stores, which two independent proxy firms agreed with. Blue Clay then withdrew its efforts, saying it was doing so because the bed maker had agreed to increase the rollout of new stores by about 20 percent compared with previous planning.

But with Blue Clay’s exit went investor excitement about Select Comfort’s stock, and its price has floated downward since. The company’s financial stability is considered by some investors to be a waste of time, given it supports a longer-term growth strategy when assets could be leveraged for more aggressive growth, as Blue Clay had demanded.

Still, this is a successful retailer with same-store sales growth other retailers such as Target and Best Buy would die to have. And within the past few years, it has evolved into an enterprising technology business. Combine its strong cash flow and balance sheet and you wind up with a sleeping giant that can continue to invest as it pleases in R&D, marketing and acquisitions.

As well as the firm is doing in a tough environment, it has not been without its challenges. Of six brokerage firms covering the company, one analyst rated the stock a sell, two deem it a hold, two have a buy rating and one a strong buy.

“Our store checks indicate that system and training issues with the front-end POS (point of sale) appear to be largely resolved; however, we believe that back-end issues (e.g., production, fulfillment, customer service) continue to drag on,” Basham wrote in a research note in mid-December. “Moreover, we believe there has been some damage to the Sleep Number brand at least near-term, contributing to sharp declines in website traffic, a key leading indicator of sales growth, and leading the company to add incremental free shipping promotions.”

Ibach acknowledges that the firm has had some issues with its ERP system. “This is a major implementation. We have had some growing pains,” she says. “But we are really excited about the future with this operating system. We expect margin expansion in the back half of 2016.”

The technology of sleep

In the past four years Select Comfort has more than doubled its spending on R&D to more than $3 million per quarter. It also has invested more than $70 million in the acquisition of two businesses for their intellectual property.

“When you are selling high-end beds, north of $1,000 to north of $2,000, product features and innovation are critical,” says John Baugh, managing director of equity research at Stifel, which has a buy rating on the stock.

“Innovation is a critical part of the company’s strategy to grow,” says Baugh. “It will drive existing customers and new customers. You can look at the average revenue per unit or company sales. They have clearly had success driving additional sales. All of the new products have helped move the needle.”

Ibach made her first strategic acquisition in 2013, when Select Comfort purchased its largest direct competitor, South Carolina-based Comfortaire, for $15.5 million. “We acquired Comfortaire for the intellectual property, [and] that led to our partner snore technology that we introduced a year ago in our flex-top mattress,” Ibach notes. The technology allows consumers to control their sleeping partner’s snoring by raising the head of the remote-controlled adjustable mattress.

In 2015, Select acquired Silicon Valley-based BAM Labs, a provider of Smart Bed Technology and a pioneer of biometric sensor and sleep-monitoring technology, for $57 million in cash. Prior to the purchase, Select Comfort held an 18 percent stake in BAM and had partnered with the firm since 2012 to develop and commercialize SleepIQ technology. BAM continues to operate as SleepIQ Labs, an independent business unit, in San Jose, Calif.

Select Comfort introduced its SleepIQ technology in 2014, creating a new category of mattress, it says. The firm’s X12 bed was the world’s first smart bed to integrate biometric sleep tracking, or “sleep knowledge,” and adjustability. A year later, the firm launched its SleepIQ Kids bed, a smart bed for kids and, according to company claims, the only bed on the market that continues to adjust as kids grow and gain weight.

SleepIQ technology tracks a sleeper’s movement and average heart and breathing rates, which the firm’s proprietary algorithm then analyzes to provide each sleeper with a daily SleepIQ score. “There is nothing for the sleeper to do but get into bed. Every morning SleepIQ helps you understand your sleep,” says Ibach. “It is so easy. To optimize your day, all you have to do is adjust the firmness of your bed.”

Putting the millennial to bed

In early January, the company introduced the “it bed,” which will be available online later this year. The it bed is targeted at first-time mattress buyers, or more specifically, digital-savvy millennials who are interested in health, wellness and performance, and who love to track data online and share it with their friends and family. “These consumers already use technology for self-improvement and make large purchases online, says Ibach. “The it bed is modern and simple. It is a product packed with technology offered at a good price point,” says Ibach. “We are extending our target consumer by bringing in the millennial.”

The company’s upcoming downloadable app, SleepIQ Application Program Interface (API), will be able to connect with the outside world and is compatible with both Apple and Android platforms.

“The active comfort technology of the it bed is different than our other mattresses,” Ibach explains. “It is a dual foam-filled air chamber controlled through an app only. There is no remote control.” (Basically it’s a scaled-down version of a Sleep Number bed with not quite the same level of adjustability.) The firm’s Sleep Number beds have more air, allowing for a greater degree of adjustment in support and softness, and are controlled using a remote control.

Eventually the API will sync with other apps offered through partnering companies—think fitness and health—and will be available in the firm’s other mattresses later this year as well. The it bed, which will have access to a sleeper’s calendar and weather data, has a predictive feature to alert its user to hit the sheets early the night before a snowstorm or an important meeting. “We will select partners that are meaningful to consumers and their overall well-being,” says Ibach. “We intend to be selective and focus on what’s meaningful to the consumer. It won’t add clutter, but instead it will be very intuitive for the consumer.”

Touch-free biometric sensors, which BAM Labs originally developed for the medical industry, are embedded in the it bed’s dual foam-filled air chambers, creating a sleeker appearance than the Sleep Number beds, where the sensors are in a pump that sits next to the bed.

“We are already seeing the benefits of the BAM acquisition. It has resulted in this innovation pipeline,” says Ibach. “Our innovations have been disruptive and are very different than [those of] our competitors.” The it bed was selected as a Consumer Electronics Show 2016 Innovation Awards Honoree.

In 2014, Select Comfort ranked third in the $14.2 billion premium mattress market, with $900 million in sales, behind Mattress Firm ($1.7 billion) and Sleepy’s ($1 billion). However, in late 2015, Mattress Firm announced it was buying Sleepy’s for $780 million. If and when the deal closes, Select Comfort will be a distant second to Mattress Firm—owner of the Hampton and Rhodes brands and exclusive reseller of Lux Living mattresses.

While Ibach has intensified the company’s efforts in R&D, Select Comfort has always been biometrically driven. “Sleep is a new science. It wasn’t even a medical discipline until the 1990s,” says Pete Bils, the company’s vice president of Sleep Science and Research. Bils started working with Select Comfort in 1994, at a time when Charles Osgood was still doing the company’s infomercials.

“At that time, no one in the industry was doing a good job of presenting sleep as an issue. They were talking about the number of springs in a mattress, pricing and the size of the bed. Not one was talking to the consumer about sleep,” says Bils, who designs and conducts both at-home and in-lab sleep studies on the company’s products.

According to National Institutes of Health studies, adults need seven to eight hours of sleep a night, yet 30 percent of the U.S. adult population gets only six hours or less on a regular basis, which comes with a cost.

“We used to attribute health issues to an unhealthy diet and sedentary lifestyle, but now we are finding out they are related more to inadequate sleep,” says Bils. “Deep sleep—which dominates the first half of night’s sleep—repairs and restores the body, while REM sleep hones our cognitive abilities. Creativity, intuition and problem-solving are refreshed during the second half of sleep. If you skimp on sleep, you are usually skimping on REM sleep.”

Of course, not all sleep is quality sleep. A person can be in bed for seven to eight hours and still get a poor night’s sleep, says Bils. He likens it to eating junk food. Likewise, junk sleep does nothing to restore the body.

Because of these basic biological truths, Select Comfort has remained true to its core product line over the 29 years the firm has been in business, a key to its success, according to Stifel & Co.’s Baugh.

Ibach will continue to sleep well as long as Americans are improving their sleep smarts.