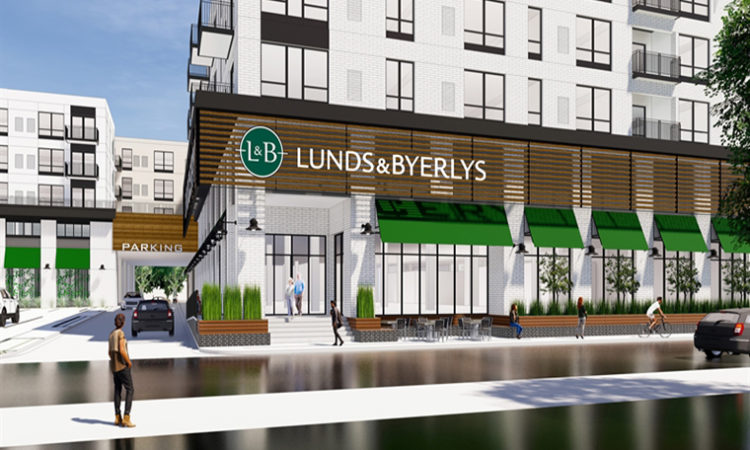 In South Minneapolis, construction is underway on a project featuring a Lunds & Byerlys grocery store and a 130-unit apartment complex.
By Burl Gilyard
March 12, 2020

New grocery stores are kind of like freshly-built apartment buildings. From the sidelines, some observers wonder how many more of either we need in the Twin Cities. The answer appears to be that the market still has an insatiable demand for new grocery stores and apartments.

A new project in south Minneapolis offers both.

High Street Residential, a subsidiary of Dallas-based Trammell Crow Co., has started construction on a mixed-use project which will include a new 24,000-square-foot Lunds & Byerlys grocery store and 130 apartments.

The site was previously home to the family-run Bergan’s Supervalu grocery store, which closed in December. It originally opened as a Red Owl grocery store in 1955.

Edina-based Lund Food Holdings Inc. currently operates 27 stores. All of those are in the Twin Cities with the exception of a store in St. Cloud. The store along the Cedar Avenue corridor is one of three new stores that LFHI has in the pipeline. The company also has plans for a location on Grand Avenue in St. Paul and another store at the planned Orchard Place retail development in Apple Valley.

The project team includes Minneapolis-based ESG Architecture & Design and Stevens Construction Corp., which has offices in Minneapolis, and in Milwaukee and Madison, Wisconsin.

Woodbury-based Kowalski’s Markets is also part of the building boom with stores planned for the Rosedale mall in Roseville and Southdale Center in Edina.