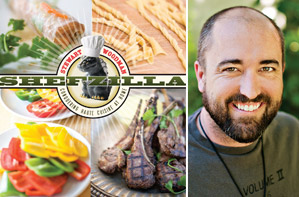 Chef Stewart Woodman's new book, despite its title, is "meant to be cooked from."
By Denise Logeland
October 16, 2010

The joke: At restaurants where he’s run the kitchen (Levain, Five, Heidi’s), “people would say, ‘Can I get the recipe for that?’ And our canned response always was, ‘It’ll be in the book.’ At a certain point, we started to say, ‘Well, I guess there should be a book.’”

The hiatus came when Heidi’s, the Minneapolis restaurant that Woodman and his wife opened in 2007, burned down last February. They’ll re-open this fall at a new location at 29th and Lyndale. Meanwhile, Woodman has been cooking at home, writing, and turning the page on some of his past repertoire.

“As a chef, you’re kind of moving through recipes, and you do a recipe and permutations and riffs on that recipe, and then after a while, you’re kind of like ‘Okay, I’m ready to give that one away and start on other ones.’”